Raju Srivastava Death: Comedian Rohan Joshi, most known for being part of the now-defunct comedy company All India Bakchod (AIB), took to Instagram to comment on comedian Atul Khatri’s post on late Raju Srivastava, who died today at the age of 58 due to heart attack. Atul had shared a post to remember Raju where he captioned, “RIP Rajubhai ❤️🙏 You were such an inspiration to so many. Whenever you went on stage you lit it up. Your presence was such that when people just saw you there was an automatic smile on their faces. You will be truly missed A big loss for the Indian Stand-up Comedy scene😢 #RajuSrivastav”.

Reacting to Atul’s post, Rohan Joshi (@mojorojo) commented with a disrespectful statement bashing Raju Srivastava. The deleted comment of Rohan read, “We haven’t lost a thing. Whether it was Kamra whether it was the roast or any comic in the news, Raju Srivastav took every opportunity he ever got to shit on newer comics especially after the new wave of stand up started. He went on every fuckall news channel every time he was invited to go shit on an upcoming art form and call it offensive just because he couldn’t understand it and new stars were rising. He might have told a few good jokes but he understood nothing about the spirit of comedy or defending someone’s right to say something even if you don’t agree. Fuck him and good riddance.” 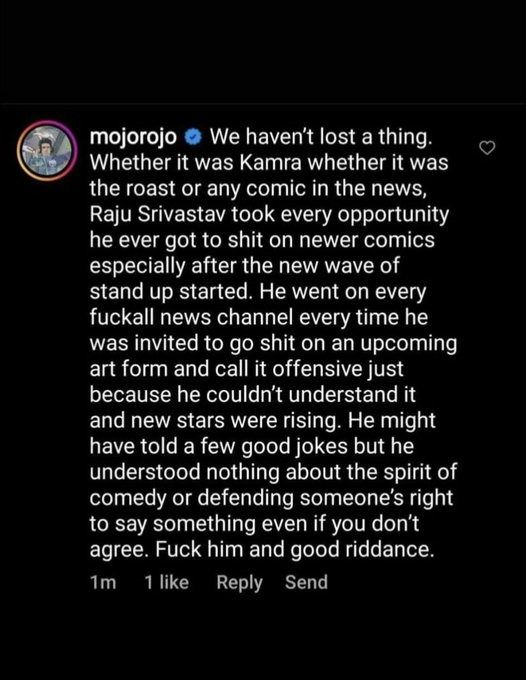 Rohan Joshi’s comment for Raju Srivastava didn’t go down well with the netizens as a lot of social media users were seen slamming the AIB fame. Twitterati slammed Rohan for his pathetic comment. A user wrote, “Holy shit this is real 💀 No words. #RohanJoshi is absolutely pathetic.” Another called out Rohan Joshi and said, “Could Find His This Post But Definitely Want To Say That He’s F**king Looser. नाच ना जाने आगन तेड़ा। Bloody He Can’t Able To Do Anything & Bitching About Other. First Look At Yourself Mr. #RohanJoshi You’re Bloody Psycho. You Need A Doctor. Rascal😡”.

What is wrong with Rohan joshi!!
Even if he has reason to hate raju srivastav he could maintain some decency. This is just disgraceful. People are so cold and callous in the name of being cool.

Raju never done cheap comedy based on sexual content.
These Rohan Joshi and other AIB team members never ever near by Raju ji comedy. https://t.co/vHyrtr1bPf

What do you think about it? Let us know in the comment section below.