Shah Rukh Khan’s son Aryan Khan is a youth sensation and enjoys a massive fan following. He makes sure to acknowledge his fans’ love and affection. On Thursday, he was spotted at the airport as he returned to Mumbai. And when Aryan stepped out of the airport, several fans crowded him to click pictures with him. Aryan Khan obliged the request of some of his young fans and clicked photos with them. One of his fans got emotional after seeing him. The fan held Aryan’s hand and kissed him.

SRK’s elder son Aryan Khan looked uber stylish in a navy T-shirt which he teamed with black cargo pants and white sneakers. He elevated his airport look with a dual-toned jacket. 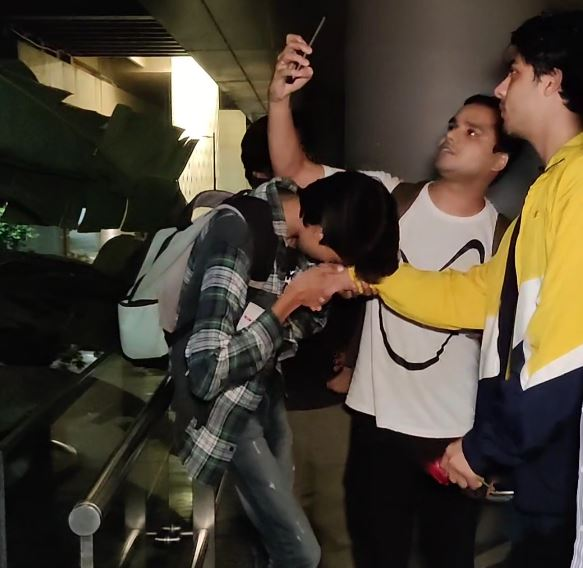 Aryan Khan Gets a Kiss from a fan

Recently, Aryan took to his Instagram account to share pictures from his photoshoot for Adidas. The 24-year-old looked at a spitting image of Shah Rukh as he posed in striking T-shirts, shoes, and jackets for the brand endorsement. Reacting to the post, SRK commented, “Looking really good… and as they say that whatever is silent in the father… speaks in the son.”

He ended his comment with a hilarious question for Aryan, asking him, “By the way is that grey T-shirt mine?”

-With inputs from ANI