Jubin Nautiyal latest: Singer Jubin Nautiyal has been embroiled in controversies due to a concert to be held in America. It is alleged that the organizer of this show is India’s most wanted criminal Jai Singh. He is a Khalistan supporter. After this, there was a demand for the arrest of Jubin Nautiyal on social media with #ArrestJubinNautyal in the trend. There were thousands of tweets with this hashtag, as reported by Dainik Bhaskar.

Jubin had tweeted the person’s name and mobile number on July 23 from his Twitter handle. After this people got angry with Jubin. His tweet was not deleted till the time of writing this news.

The name of the owner of the company with which Jubin had signed the contract has also been added to this controversy.

After the controversy escalated, Jubin’s father Ramsharan Nautiyal told Dainik Bhaskar that Jubin had signed a contract with some other organisers and Jai Singh or Rehan Siddiqui who have created a ruckus, Jubin does not even know them. 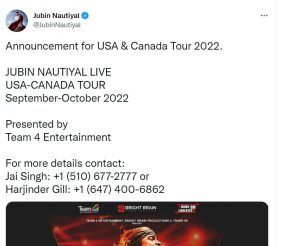 Jubin had tweeted the person’s name and mobile number on July 23 from his Twitter handle. (Image: Twitter/@JubinNautiyal)

He said, “We had an exclusive contract with a company, but this company sold that show to some other company. Jubin did not even know this. When that second company contacted Jubin, he refused to do the show. It’s been almost a month since the show got cancelled.