Urfi Javed Nude Video Goes Viral: Urfi Javed is an internet sensation who is bold, confident, and smart. Every day she shares a new post on Instagram and surprises her followers with her bold fashion choices. After Ranveer Singh’s nude photoshoot, Urfi has been flaunting nakedness in public for attention. Urfi, on Monday, exposed her breast by wearing nothing. She covered her assets with her hands and used a green rope to make a zig-zag design on her body. The Bigg Boss OTT fame wore a nude colour brief to give that all nude look. On Instagram, Urfi shared this daring video with a beautiful hairdo big fun with red roses.

Urfi was spotted in a glam-up look, she wore a glossy lip-tint, and wing eyeliner. With filled brows and mascara-laden eyes, she was looking too sultry for the photoshoot.

Urfi Javed wore a traditional bridal necklace and nose ring to give that sultry look. Urfi has received mixed reactions from the comment section. A fan appreciated her efforts and called her ‘flawless’. Another user wrote, “So gorgeous and lovely to day ❤️❤️❤️❤️❤️❤️❤️❤️❤️❤️❤️❤️❤️”. A few people trolled Urfi for wearing ‘nada (rope)’ to hide her figure. “Aapne nada kyun pehna hain”. 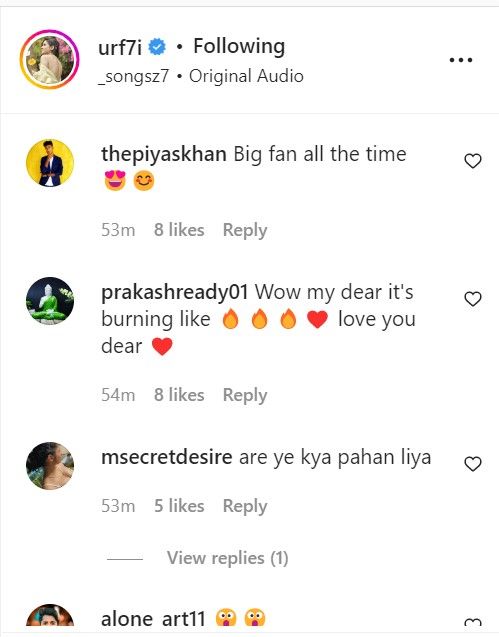 Urfi was a contestant in Bigg Boss OTT season 1 and appeared in daily soaps like Meri Durga and Bade Bhaiyaa Ki Dulhaniya.