Urfi Javed Dons Green Thong Monokini on The Streets: Urfi Javed never disappoints her fans and followers and always keeps coming up afresh with innovating and sensational fashion statements. Urfi, known for her bold choices in life and dressing style once again raised eyeballs with her sizzling hot avatar. Urfi was recently spotted prancing in a sexy green thong monokini at the streets as she was clicked by the paparazzi. Urfi completed her look with netted ropes tied over her waist. The actor has previously stated in many of her candid confessions that it is her life and she neither cares about moral policing nor the trolls. Urfi had recently supported actor Ranveer Singh on being trolled and the FIR filed against him for the nude photoshoot. Urfi had mentioned that when she got online threats, no action was taken against the culprits. However, there was immediate action on Ranveer for his photoshoot.

Urfi can be seen walking at the streets in scorching hot chartreuse green thong monokini. Urfi smiled at the shutterbugs and posed for them while getting snapped in her hot costume. Netizens came up with hilarious reactions on Urfi’s viral video clip. A netizen commented, “Ranbeersingh part 2😂😂😂😂.” Another user wrote, “There needs to be a clothing drive started for her👍.” A fan also commented, “It needs courage to do all this 🔥 immense power she has.”

Check out the hilarious reactions: 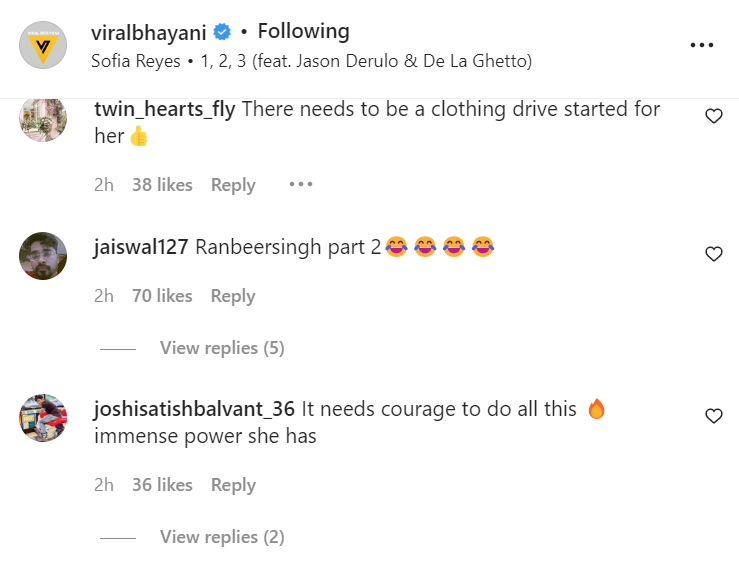 Urfi Javed is an actor who was a contestant in Bigg Boss OTT Season 1. She also appeared in daily soaps such as Meri Durga and Bade Bhaiya Ki Dulhaniya.

For more updates on Urfi Javed, check out this space at India.com