A video of Janhvi Kapoor hilariously recreating TV actress Tejasswi Prakash’s popular dialogue from Naagin 6 is going viral on social media. Janhvi who is gearing up for her next ‘Good Luck Jerry’ shared the quirky video on her Instagram which went viral within no time. In the video Janhvi dressed in a white coloured cropped tank top with grey pajamas is binging on some chocolate to satisfy her midnight craving. As her friend caught her red-handed, she hilariously mimcks Tejasswi’s midnight walk dialogue from Naagin 6 and her performance is winning fans’ hearts. Janhvi captioned the video as, “Jab midnight cravings wali walk ke beech koi tumhe pakad le”.

The Dhadak actress aces with her expression and is bang on in mouthing Tejasswi’s dialogues. The original scene in Naagin 6 was between Mahek Chahal and Tejasswi Prakash.

While fans loved Janhvi’s video, Tejaswwi too seemed to be amused by the former’s performance, sharing the video on her Instagram story the Naagin 6 actress made 3 heart emojis.

Ekta Kapoor, who is the producer of Naagin 6, loved the video and dropped a comment on the post. She wrote, “Ded😂😂😂 if kaira had a twin or shesh nagin pratha had shape shift avtaar woth sugar cravings.” 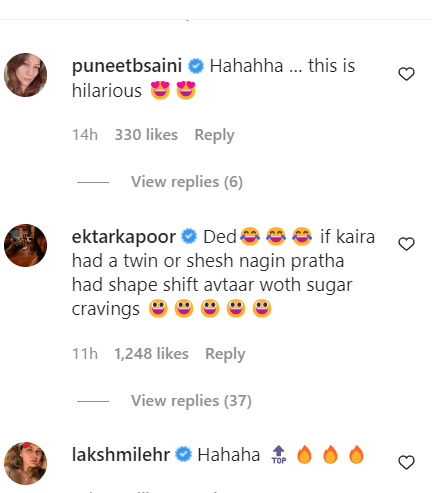 On a related note, Naagin 6 stars Tejasswi Prakash, Simba Nagpal, Mahek Chahal, Sudha Chandran and Urvashi Dholakia in prominent roles. Tejasswi, who plays the role of a shape-shifting snake in the show, is currently seen essaying the role of Kaira who has returned from foreign and has an accent.