Kangana Ranaut Congratulates New Maharashtra CM: Actor Kangana Ranaut has welcomed the new chief minister of Maharashtra Eknath Shinde after being at odds with the Shiv Sena-led Uddhav Thackeray administration. The actor praised him for his inspiring journey from auto-rickshaw driver to the most powerful person in the country. Sharing a picture of the political leader on her Instagram story, she captioned it, “What an inspiring success story… From driving auto-rickshaw for a living to becoming of the most important and powerful people in the country… congratulations sir (sic).” 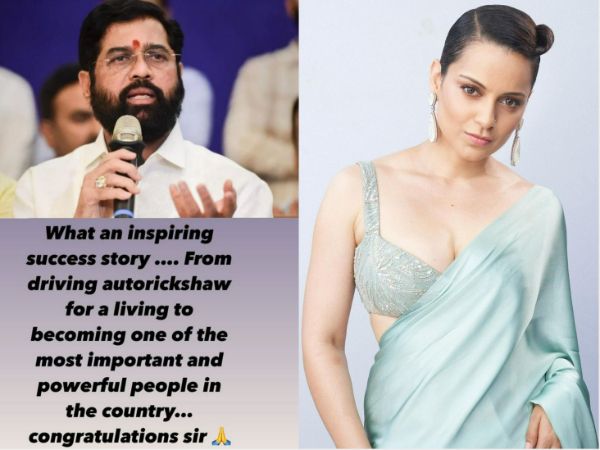 Kangana and the Uddhav Thackeray administration have been at odds for a while, and she has criticized him numerous times on social media. Kangana just posted a video on her Instagram in response to Uddhav’s departure from the position of chief minister.

In the video, she said, “In 2020, I had said that democracy is a belief system. And those who destroy this belief system because of a greed for power are doomed. Their arrogance will be demolished. This shows a person’s character,” in Hindi.

For the unversed, Uddhav Thackeray resigned as chief minister when the state experienced a political crisis. Eknath Shinde was chosen as the next chief minister of Maharashtra, and the Bharatiya Janata Party was announced to be the state’s new ruling party. Kangana Ranaut has been an outspoken BJP supporter.

On the work front, Recently, Kangana Ranaut served as the host of the captive reality program Lock Upp, which proved to be very successful for OTT platforms. She will play an officer in the Indian Air Force in her upcoming film Tejas. She is presently engaged in her Emergency producing project. She will be seen in the movie playing Indira Gandhi.