Actor Mandana Karimi, who was recently seen in Lock Upp, made headlines on Monday for sharing a video where she twerked in a hijab (burqa). The actor has been shooting for her next project and as part of the same, she wore a black Burqa in what looked like a shopping mall. Mandana took to her Instagram Reels to share a short video in which she is seen dancing in a quirky manner. The twerking video didn’t go well with the netizens, they trolled for disrespecting the hijab. Mandana then, later on, responded to the criticism and reacted to the trolls saying, “And of course reading comments on my burka reel. DAMN people are crazy, this is a crazy world. I’m done, I wanna be a unicorn.” 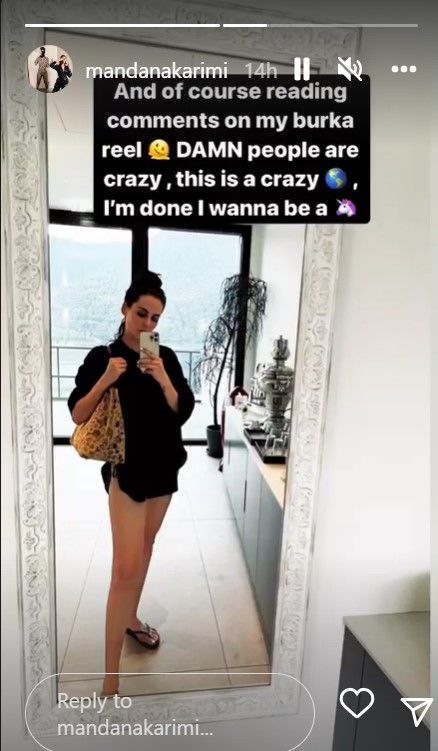 Mandana Karimi had shared the video a while ago and captioned it, “I wish shooting with Hijab was as easy as this BTS NO HATES just bunch of people making a film #istanbul #hijab #چادر #weekend (sic)”.

Mandana Karimi was last seen in Kangana Ranaut’s hosted reality show Lock Upp. She had entered the house as a wild card contestant and stirred up things inside the house. From making revelations from her personal lives to arguments with contestants, Mandana created a lot of noise inside the jail.