‘Uff!’ Alaya F Looks Smoking Hot in Red Bikini: Alaya Furniturewala never shies away from flaunting her hot bod and is always game when it comes to donning a bikini. Alaya is completely at ease with her femininity as she exudes her bold and sexy persona in her poolside pictures and videos she often shares on social media. Alaya seems comfortable in her own skin as she has previously also posted pictures in swimwear, be it her vacation or a photoshoot. Alaya in her recent pictures raised the mercury levels in a red hot bikini with dark blue stripes. Alaya, who has over 1.2 million Instagram followers often treats her fans with her sexy and bindaas pictures.

Alaya in the post can be seen sitting in candid poses as she plays the muse for the sensuous photoshoot. Alaya looked the perfect exotic Indian beauty in the enchanting picture while she wore a bold two-piece bikini with dark blue stripes. Alaya kept her hair open while sitting in a sexy pose at the poolside. Alaya brings oomph and sensuality in the two pictures which she posted along with a goofy caption. She wrote, “I’d like you all to know that as I’m posting these images, I am currently sitting on my couch wearing an oversized T-shirt and baggy track pants and my hair is tied up in a frizzy bun.. even idk who the girl in these pictures is 😂.” 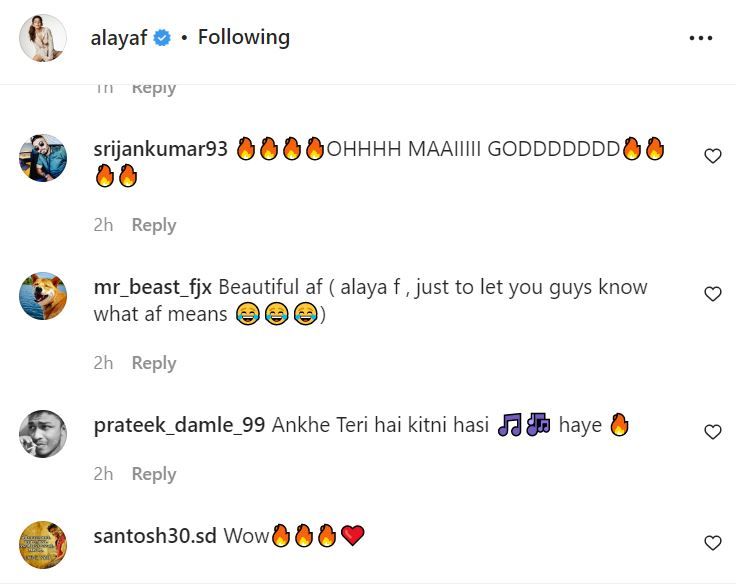 Alaya Gets a Thumbs up From Netizens

Alaya is the daughter of Pooja Bedi and the granddaughter of the veteran actor Kabir Bedi. Alaya made her Bollywood debut with Jawani Jaaneman (2020) where she played Saif Ali Khan’s daughter. Alaya will next be seen in Freddy and U Turn.

For more updates on Alaya Furniturewala, check out this space at India.com.