Mom-to-be Sonam Kapoor, who is expecting her first child with her husband Anand Ahuja recently hosted a lavish baby shower in London. Sonam’s baby shower was attended by few of her close friends and her sister Rhea was also part of the celebration. Pictures and videos from the Sonam’s baby shower went viral on social media and one person who grabbed the limelight, besides the pregnant actress was London-based singer Leo Kalyan, who sang his renditions of ‘Masakali’ and ‘Chura Liya Hai Tumne Jo Dil Ko’.

Leo had shared glimpses from Sonam’s baby shower on Instagram. Leo is seen standing next to Sonam in the pics. He wrote in caption: “A spice girl in Bollywood. I just performed at Sonam Kapoor’s baby shower..what is life?” Leo captioned the post. 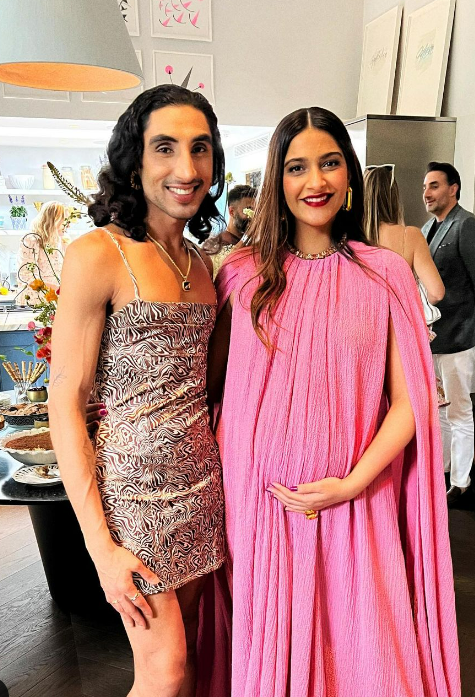 Leo opted for a strappy dress for the occasion and posed alongside preggers Sonam Kapoor.

After performing at Kapoor’s baby shower, the British-Pakistani singer Leo Kalyan, who prefers the pronouns he/she/they, found themselves at the receiving end of trolling on social media. A section of social media users criticised Leo for wearing a strappy dress at the bash. One Instagram user called out the haters to which Leo responded with an Instagram story.

“Hate comments don’t bother me at all. because firstly – some of them are so genuinely funny, I share them with my friends and we laugh endlessly (laughing emoticon) also, hate comments always remind me that just by casually living my life – I’m actually CHALLENGING people and societal norms. which means: I’m doing something right,” Leo wrote.ho Is Leo Kalyan? British-Pakistani Musician Who Performed At Sonam Kapoor’s Baby Shower Reacts To Hate Comments.

Check out Leo’s response to trollers: 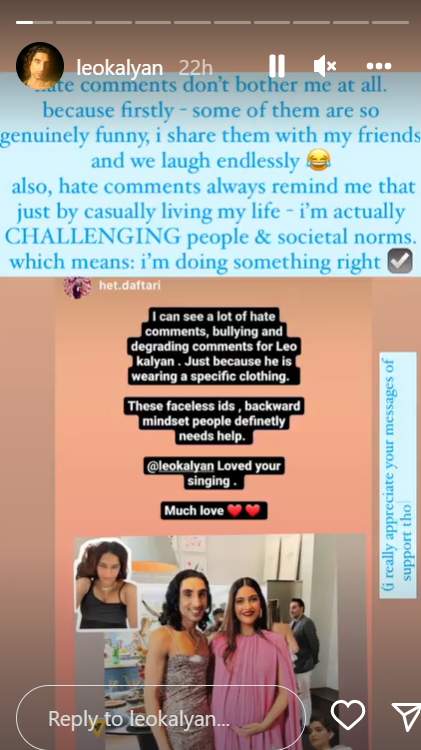 Who is Leo Kalyan?

British-Pakistani singer Leo Kalyan, identifies himself as he/she/they on Instagram is a popular musician. He performed live at Sonam Kapoor’s baby shower. Leo opted for a strappy dress for the occasion and posed alongside preggers Sonam Kapoor. Leo has over 87k followers on Instagram and the artist often posts pictures with fashionable attires and videos of their singing covers on social media. Leo recently gave a surprise performance at Academy award-nominated singer Riz Ahmed’s show.