Comedian Munawar Faruqui who recently won the first season of Kangana Ranaut’s hosted ‘Lock Upp’ is facing the ire of netizens for mocking Hollywood singer Justin Bieber’s facial paralysis. For the uninitiated, Justin Bieber recently revealed that he is diagnosed with Ramsay Hunt syndrome, a form of partial face paralysis. In a video shared on his social media, the singer had said the right side of his face has been paralysed and he cannot even smile or blink.

Justin Bieber reveals he is suffering from facial paralysis

Meanwhile, Munawar Faruqui taking a dig at Justin Bieber’s facial paralysis didn’t go well with the netizens, who called out the comedian and termed his tweet as ‘distasteful’. Several internet users lashed out at Faruqui saying that jokes on someone’s illness shouldn’t be made.

Munawar’s tweet read, “Dear Justin Bieber, I can totally understand. Even here in india right side not working properly.” He shared the tweet on his Instagram profile too.

Even here in india right side
not working properly.

Many users are not happy with the comedian making fun of someone’s illness. A tweet read, “Making jokes about someone’s illness just shows how jahil you are… It doesn’t make you funny.” Another user wrote, “I am a fan, don’t use someone else’s pain and turn it into your pleasure in the name of comedy, it is actually not funny, be the creative content that we all know you can be, using someone’s heath condition is not creating content it’s just creating #kachra. #disappointed.”

Check out some of the fan’s reaction below: 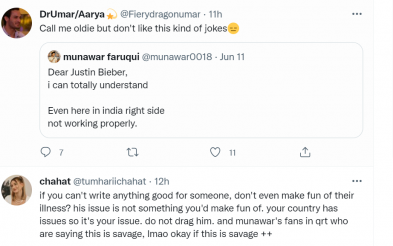 On work front, after winning the first season of reality show ‘Lock Upp’, Munawar Faruqui is back to his stint with stand-up comedy.