During a television discussion a few days ago, politician Nupur Sharma made some unflattering remarks about Prophet Mohammad by invoking the Hadith. The words prompted nationwide outrage, and the BJP spokeswoman was also suspended from the party. Even as people across the country have taken up slogans against the politician, actor Kangana Ranaut, who is known for not holding back her views showed support. The actor shared a conversation between Imtiaz Jalil and Owaisi in which Nupur’s fiasco is mentioned and wrote, “Many of my Muslim friends drink and smoke, have premarital sex, don’t wear burkha, use swear words, eat pork and because of work situations at time don’t even follow halal guidelines… it’s fine beauty of India is freedom nahi toh not just Nupur but everyone will become criminals…(sic)” 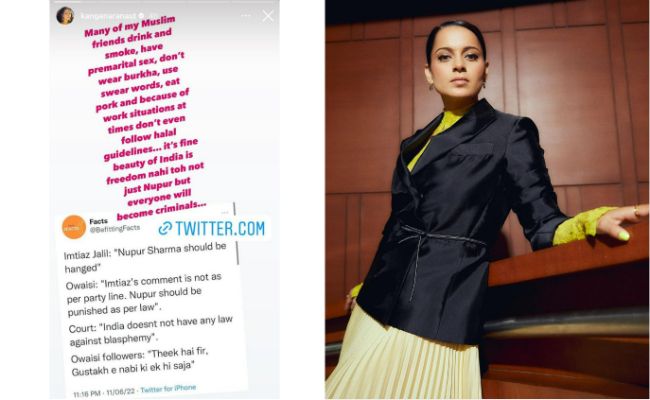 “Just because a woman out of rage quoted Hadith toh poore desh ko sar pe utha liya hai, what kind of people do this…such alarming behavior,” she said on her Instagram account with a still from the film PK.

Kangana had previously shared a photo of an effigy being hung in the middle of the street, writing, “This horrifying image is not from Afghanistan it is India, peaceful people are hanging effigies of Nupur.” The actor also chastised a member of parliament for calling for Nupur to be punished for quoting the Hadith.