While Madhavan and Nawazuddin opted for black tuxedos, Ricky, Prasoon and Anurag could be seen dressed in bandh gala suits of blue, black and cream colours respectively. Vani Tripathi wore a beautiful blue saree and Shekhar Kapur donned a white kurta with a Nehru jacket.

A historic moment as India 🇮🇳 the 1st ‘Country of Honour’ at Marche Du Films @Festival_Cannes gets set to manifest into the ‘content hub of the world and the preferred ‘post production hub’ for global film makers. pic.twitter.com/GNHm1jWIiB

It’s a special time for R Madhavan at Cannes 2022 as he is making his directorial debut on a mammoth scale. His upcoming film, Rocketry: The Nambi Effect is heading towards a world premiere at the Cannes Film Festival, and the actor is also representing India on the prestigious platform. While sharing the pics from the red carpet, Maddy wrote, “Only @manishmalhotra05 Can make an already special and memorable day even more special. Thank you for making me feel so good about myself. My confidence soared because of you guys. Thank you @manishmalhotraworld . Styled by – @priyanjalirajlaxmisingh Shoes- @dolcegabbana #RocketryAtCannes”.

Apart from these Nayanthara, Pooja Hegde, Tamannaah Bhatia and folk singer Mame Khan are also a part of the Indian delegation led by the Information and Broadcasting Minister. Actor Akshay Kumar too was part of the official delegation but had to opt-out after he tested positive for COVID-19. While speaking to ANI about being part of the Festival, Tamannaah shared that she’s very excited. “I am so excited about this, it’s such an honour and I am really looking forward”.

Bollywood diva Deepika Padukone, who is currently creating waves at Cannes Film Festival as a jury member. She just attended the red carpet ceremony for the 75th annual Cannes film festival, wearing a saree designed by none other than Sabyasachi. The official Instagram page of Sabyasachi shared a series of pictures of Padukone wearing his creation teamed up with the headband that pays homage to the traditional Indian matha patti headpiece with Art Nouveau detailing, while the chandelier earrings updates a classic with an Art Deco gaze. 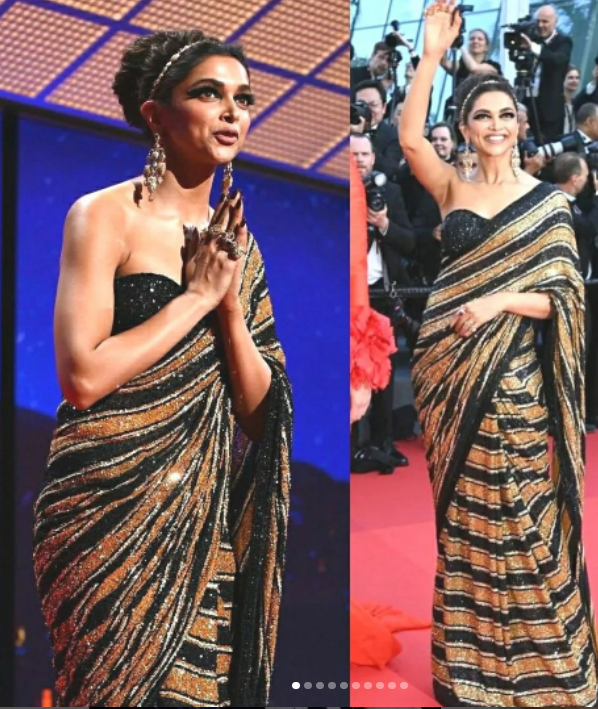 Deepika Padukone opts for a Sabyasachi saree at Cannes 2022

Rajasthani singer Mame Khan also made history by becoming the first folk artist to open Red Carpet for India at the Cannes Film Festival. On the red carpet, he could be seen dressed in a traditional Rajasthani ensemble that included a vibrant pink Kurta underneath an ethnic embroidered coat.

On Wednesday, the Indian pavilion at the 2022 Cannes Film Festival will be inaugurated on Wednesday with a video message by Prime Minister Narendra Modi. At the launch, Thakur along with a host of dignitaries will be present.

At the 75th edition of the Cannes Film Festival India has been named the ‘Country of Honour’ at the Marche du Film, the business counterpart of the marquee event.