Twinkle Khanna Pitches Tea With Twinkle: Twinkle Khanna known for her feisty opinions and writings with a pinch of humour recently spoke about Koffee With Karan Season 7. The actor turned author, who had previously appeared on Karan Johar’s show with her actor husband Akshay Kumar said she is not interested to be a part of the show. Twinkle said she would rather have her own  show instead of being a guest on the filmmaker’s celebrity talk show. Check out this post by Twinkle on her Instagram handle:

Known to be a satirist, the author captioned her post as, “On a set I am prone to mumbling, ‘Shoot me now,’ though I secretly mean with a Nerf gun and not a camera, but then there are days like these when it’s all fun and games. Hmm.. Can’t do Koffee with Karan again but Tea with Twinkle may not be a bad idea after all:) #behindthescenes #shootmenow.” In the black and white monochrome photo, Twinkle is seen sipping a cup of coffee, with rollers on her hair. Check out the fan reactions: 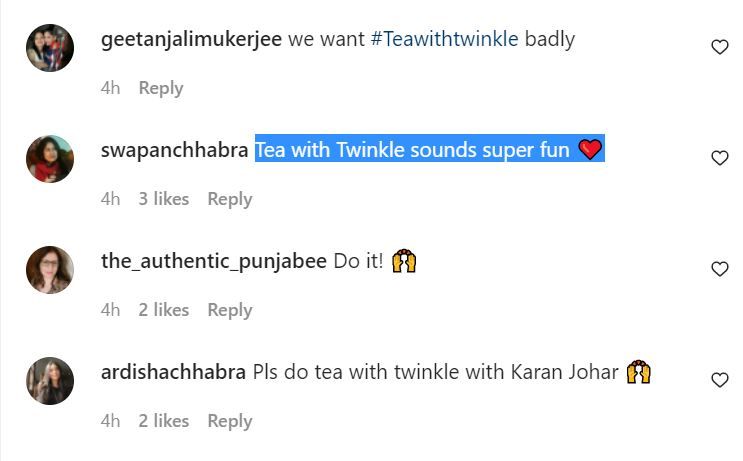 ‘Tea With Twinkle’: Twinkle Khanna Not Keen to do Koffee With Karan, Jokes About Her Own Talk Show(PC:Instagram/twinklerkhanna)

Fans Excited About Tea With Twinkle!

For more updates on Koffe With Karan 7 and Twinkle Khanna, check out this space at India.com.