Salman Khan Wishes Team Dhaakad: Superstar Salman Khan backed actor Kangana Ranaut ahead of the premiere of her film Dhaakad on Thursday. The action film’s new trailer was released shortly after. Salman Khan shared the new teaser for Kangana Ranaut’s Dhaakad on Twitter. “Wishing team #Dhaakad the very best!” he said.  He tagged Kangana and her co-star Arjun Rampal. Dhaakad, directed by Razneesh Ghai, is a female-led spy action thriller that features the ‘Queen‘ actor in a new action-hero role.

Salman Khan has received accolades from Kangana Ranaut after the latter shared the trailer for her next film Dhaakad on social media. In response to Salman’s generosity for her film, Kangana applauded and thanked him for his ‘heart of gold.’ She also declared that she will no longer refer to herself as ‘alone’ in Bollywood. She said, “Thank you my Dabangg hero heart of gold…I will never say again that I am alone in this industry…thank you from entire Dhaakad team.” 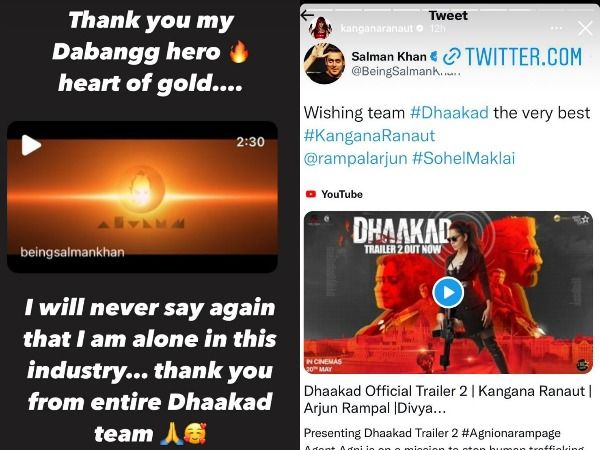 Apart from Kangana’s varied looks, the action scenes in the film are already drawing attention. The trailers hint that the film would be packed with action sequences. Kangana Ranaut plays Agent Agni, a spy in the film Dhaakad. She’s on the hunt for Rudraveer, a human trafficker played by Arjun Rampal. Divya Dutta and Saswata Chatterjee also appear in the film.