Mumbai: Actor Urfi Javed has appeared in a number of television shows, including Kasauti Zindagi Kay 2 and Chandra Nandhini, to name a few. She was chosen for Bigg Boss OTT, hosted by filmmaker Karan Johar, after these shows, and she is now an internet sensation. She is frequently mocked on social media for her wardrobe choices and unusual sense of fashion. She recently resorted to social media to express her displeasure with the media’s hypocrisy. Urfi recounted on her Instagram story how she gets bullied because she wears transparent clothing. She then uploaded an article about Indian actor Samantha Ruth Prabhu, pointing out how someone who dresses similarly to her is deemed brave and gorgeous.

Urfi stated that she loves Samantha next to the screenshot, however, she is merely referring to the headlines in both publications. She wrote, “Now you guys know what I’m talking about also I love love Samantha. I’m Just talking about the headlines.” The headline mentioned for Urfi read, “Urfi wore a transparent dress more than a mosquito net, people’s anger rained on ugly fashion..” While Samantha’s article headline read, “Samantha wore a transparent shirt to show boldness, raised internet temperature. 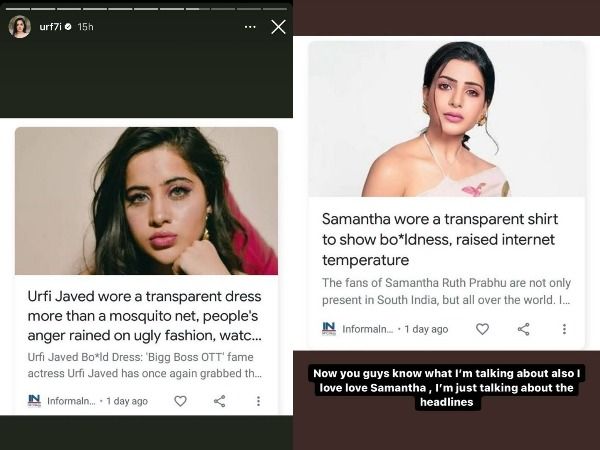 Urfi Javed is unconcerned about the teasing and criticism she receives because she dresses the way she wants. She plays around with her look and makes sure that everyone’s attention is drawn to her. She rocks anything with aplomb, from the most unique designs to the most eccentric cut-out gowns and quiffs.

Watch this space for more updates on Urfi Javed!