Salman Khan Greets Fans on Eid: Actor Salman Khan is known for greeting his fandom on Eid and his birthdays. The Tiger 3 actor greeted his crazy fan fare from his building as they came to get a glimpse of him on Eid-ul-Fitr. Salman who enjoys a massive fandom waved to the crowd who had gathered to see him. Check out this clip shared by Viral Bhayani:

As Salman came out at his balcony he waved and interacted with his fans through hand gestures. The actor known for Eid blockbusters always has something special for the audiences on Eid. While this time there was no film release, Salman lightened up the spirits of his fans dressed in a dark blue Kurta for the occasion. The crowd cheered up while the Tiger 3 star smiled at them. A fan commented “Happy eid my hero❤️❤️❤️” on the viral clip. Check out the comments: 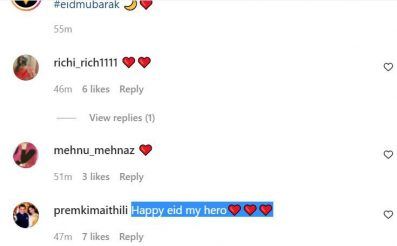 Salman Geared up For Eid And Diwali!

Salman is all geared up for his next Kabhi Eid Kabhi Diwali and Tiger 3 with Katrina Kaif and Emraan Hashmi. The actor also has a cameo in YRF’s Shah Rukh Khan, Deepika Padukone and John Abaraham starrer Pathaan.

For more updates on Salman Khan check out this space at India.com.