New Delhi: While BTS fans in India have already seen edits of the group dancing to Rashmika Mandanna’s Saami Saami or Samantha Ruth Prabhu’s Oo Antava, here’s a new video that will leave everyone stunned. Now, another edited video of the K-pop singers is going viral on social media in which they can be seen dancing to the title track of Dhanush and Sonam Kapoor’s movie Raanjhanaa.

The video was originally posted on January 10 by an Instagram page called ‘qualiteaposts’. In the video, BTS boys – Jungkook, Jimin, Jin, J-Hope, V, Suga and RM can be seen dancing in an indoor studio as they rehearse on their super hit song Dynamite. The singers are dressed in loose t-shirts and pyjamas. However, the Raanjhanaa track has been added to the background music of the video. Surprisingly, with BTS boys tapping their feet, the video looks unbelievably true and amazing.

Even Bade Acche Lagte Hai 2 actor Disha Parma took to the comment section of the video and expressed amazement. “How do you even do this!!” she wrote. 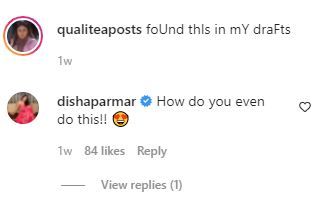 Even Disha Parmar Is Left Stunned!

Several other fans also expressed excitement and surprise in the comment section. “Someone explain to me why does every song go with Dynamite’s dance practice????” one of the fans wrote. Another social media user commented, “The ‘B’ of BTS is for Bollywood.”

This is not the first time that an Indian edited version of the BTS dance video has gone viral. Just a few days back, the singers were seen grooving to Rashmika Mandanna’s Saami Saami song from the movie Pushpa in a hilarious video edit.

BTS boys have never visited India, but they enjoy a massive fan following in the country. From Bollywood actors to college students, there is a long list of members in the Indian ARMY. In 2020, the group said that they would travel to India once the pandemic is over. Meanwhile, the septet is due to hold their Permission To Dance On Stage concert in Seoul in March this year.