You’ve read the books, seen the movies, and been heartbroken by the conclusion of the world’s most popular fantasy epic. The magic, though, continues to exist. So take your wand, don your invisibility cloak, and have your marauder’s map handy as you head to the most magical Harry Potter filming locations. 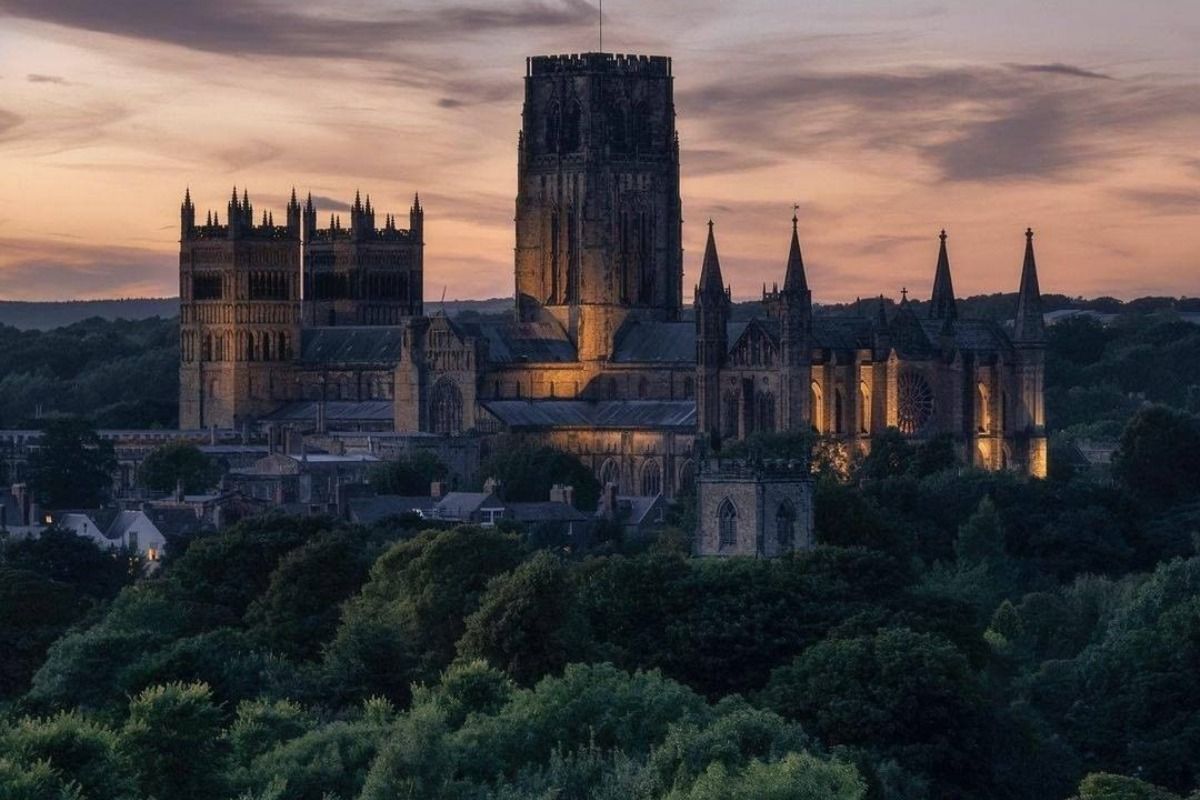 Wingardium Leviosa: This flotation charm is one of the first spells taught to Hogwarts newcomers. (Picture Credit: Durham Cathedral/Instagram)

In the Philosopher’s Stone and Chamber of Secrets, the beautiful Durham Cathedral was used as several features of Hogwarts. The breathtaking building serves as the backdrop for Harry, Ron, and Hermione being taught how to transform animals into water goblets. Visit this historic structure in one of England’s most cultural cities to relive the scenes. Durham Cathedral welcomes tourists every day of the year. The timings from Monday to Saturday are up till 6 PM whereas it closes 30 minutes early on Sunday.

Must know: There is no charge to attend, but donations are encouraged and appreciated. 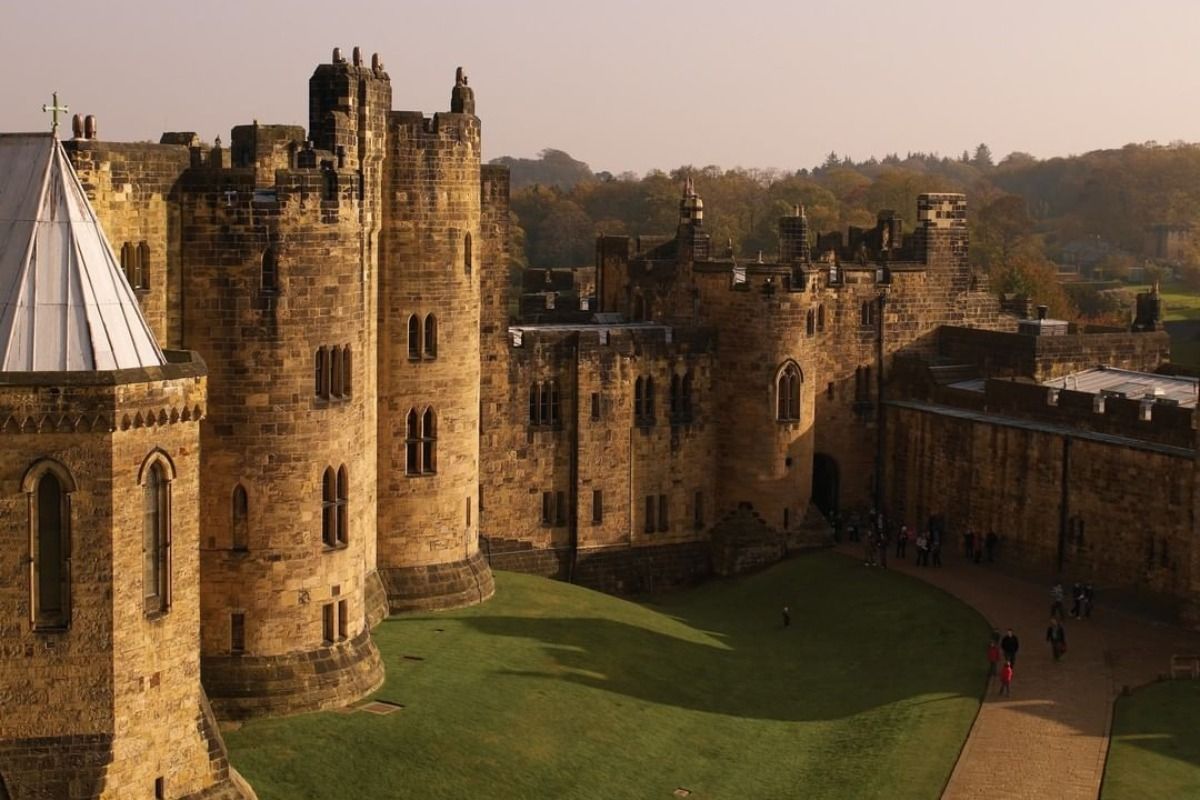 During the 2001 Harry Potter and the Philosopher’s Stone and the 2002 Harry Potter and the Chamber of Secrets films, Alnwick Castle played the mystical Hogwarts School of Witchcraft and Wizardry. This is one of the most iconic Harry Potter movie locations, and you can not only tour the castle but also try your hand at broomstick flying! Alnwick, we believe, is as near to the real Harry Potter Castle as you can go.

Additional detail: Alnwick Castle will be closed for the winter from 1st November 2021, re-opening spring 2022. 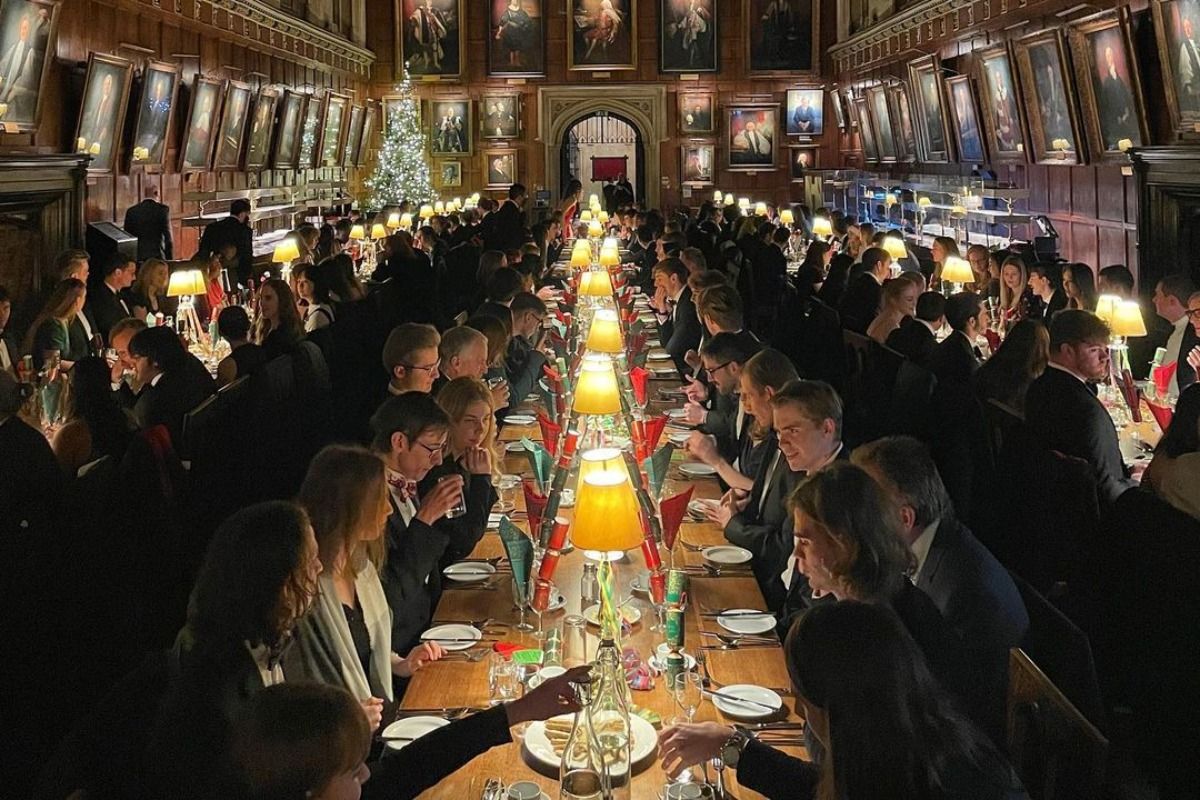 Happiness can be found in even the darkest of times, if one only remembers to turn on the light – Albus Dumbledore (Picture Credit: Christ Church Oxford/Instagram)

Explore the cloisters and quadrangles of Christ Church College, which served as the setting for many of the Hogwarts sequences in the first film. Book a room at Christ Church and have breakfast in The Great Hall. It was used to construct the enormous Hogwarts Hall in the movies. Remember to take a photo on the 16th-century stairwell, where Professor McGonagall greets Harry and the new first-years.

Additional detail: All tickets to visit Christ Church must be booked in advance online. Tickets will be released on a weekly basis. 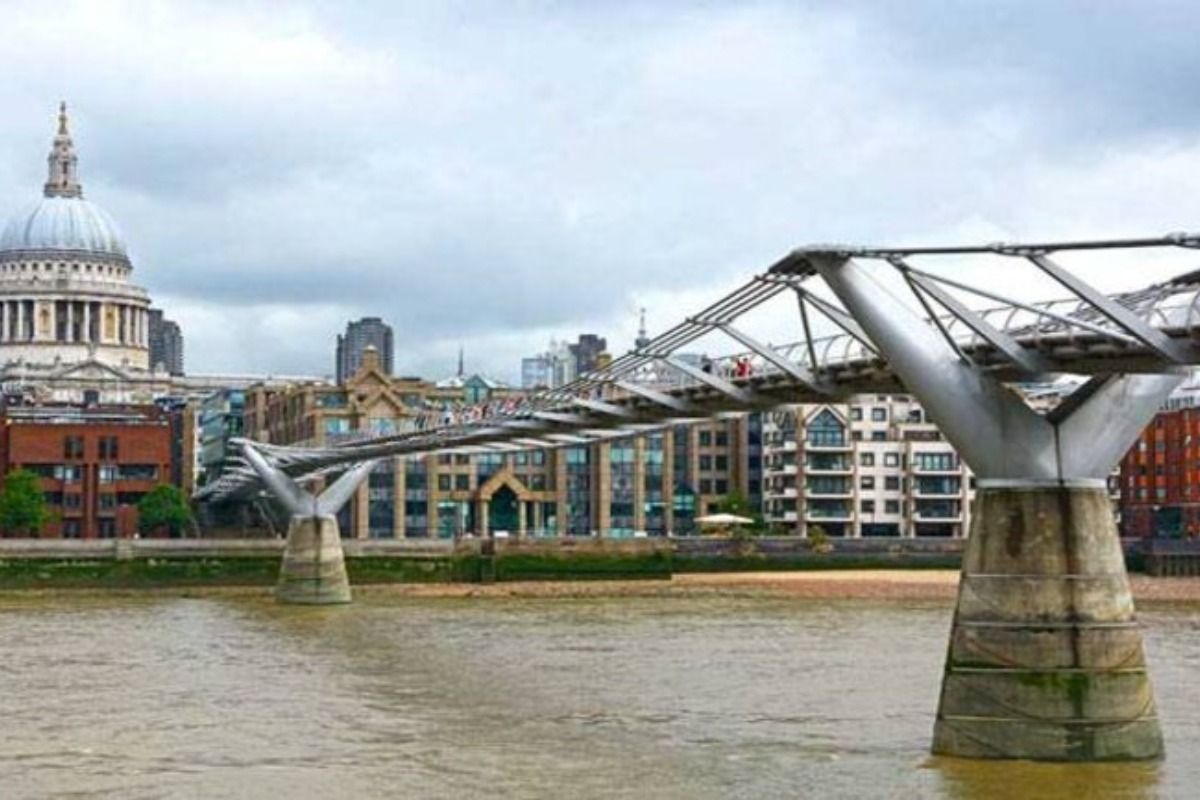 Even after the Voldemort attack, the original version can still be seen on the Thames riverbank (Picture Credit: Makemytrip.com)

The Millennium Bridge, which is featured in a dark and eerie London, is the location of Harry Potter and the Half-Blood Prince before being demolished by death eaters. Brockdale Bridge is the name of the bridge that the Death Eaters destroy in the novel. It is a steel suspension bridge that spans the River Thames and is only open to pedestrians. It connects Bankside to the City and provides spectacular views of St Paul’s Cathedral as you walk from south to north.

Must know: The Millennium Bridge is open 24 hours a day, seven days a week. 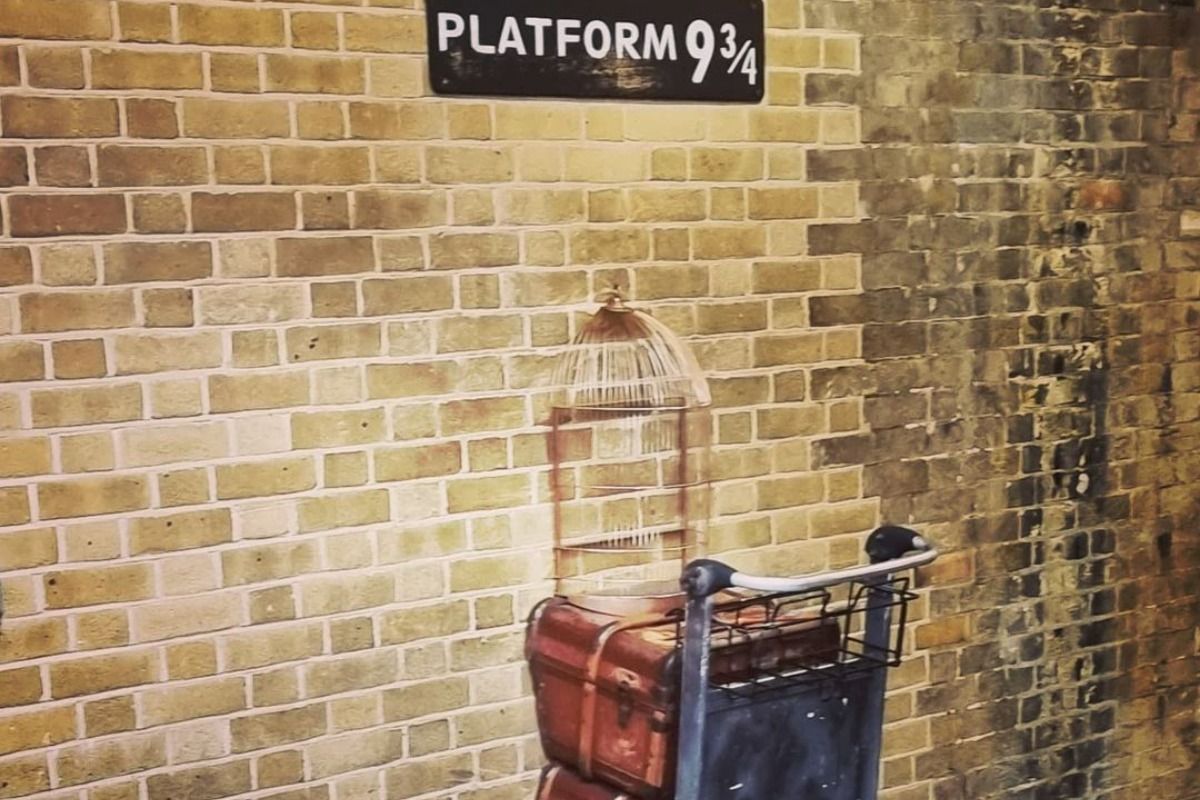 Seek for a luggage trolley set in the wall and pretend you’re about to embark on your magical adventure. (Picture Credit: Martin/Instagram)

Platform 9 ¾ will be familiar to everyone who has ever read a Harry Potter novel or seen one of the films. For those who haven’t heard, the Hogwarts Express begins its long journey to Hogwarts School. Harry, Ron, and Hermoine went via King’s Cross Station’s Platform  9 ¾ to board the express. Platform 9 ¾ at King’s Cross Station is located in the arched wall between platforms 4 and 5, which is where the Hogwarts Express departs. If it doesn’t sound magical enough, head to the west side of the station, where you’ll see a trolley disappearing into the magical realm through a wall marked Platform 9 ¾.

Tip: If you go to King’s Cross, you can see the real Platform  9 ¾, take photos with a trolley that runs through the wall. 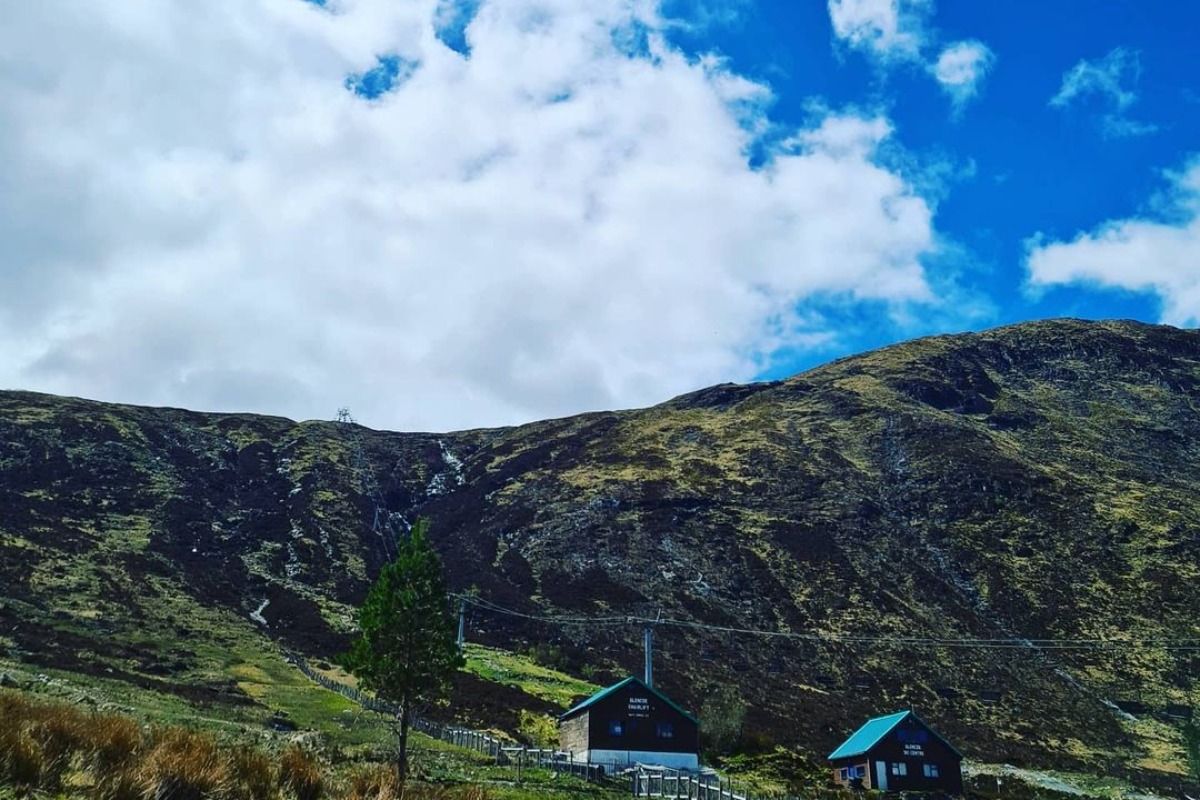 Do you have someone like Hagrid in your life to back you up everytime? (Picture Credits: Glencoe/Instagram)

Hagrid’s Hut, replete with a pumpkin patch and blazing chimney, the sundial, and the turreted gatehouse, and the Bridge to Nowhere nestled neatly on the hillside above Clachaig, surprising visitors in the early summer. The sets have been taken down, and the slopes have been restored to their natural form, leaving little trace of the flurry of activity that erupted in this peaceful part of the glen for a few weeks. 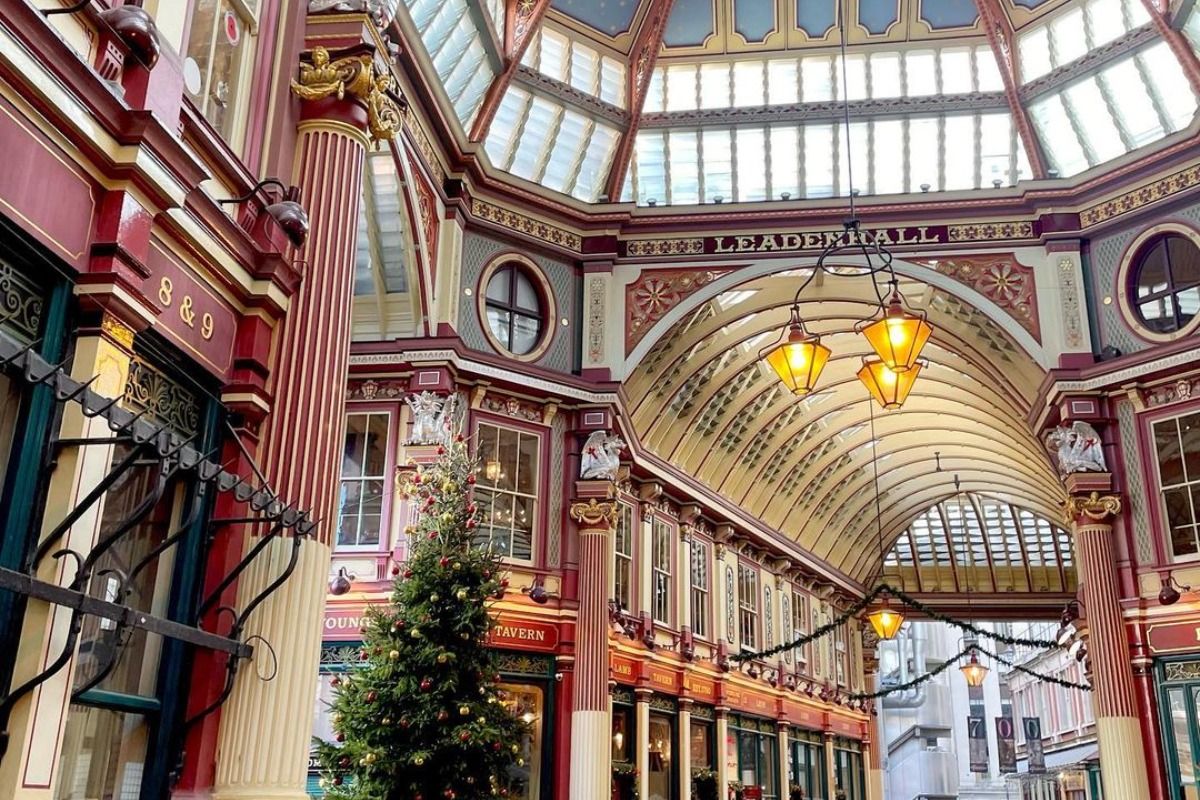 The exterior of Diagon Alley and the Leaky Cauldron, as well as the scene where Harry Potter and Hagrid go wand buying! So, if you’re a Harry Potter fan, you must include this magnificent ancient marketplace in your London trip. Leadenhall Market, located between Bank and Tower Hill, is one of London’s oldest markets. When you first go into Leadenhall Market, you’ll be taken aback by the high arches, elaborate shop fronts, and antique gas lights. 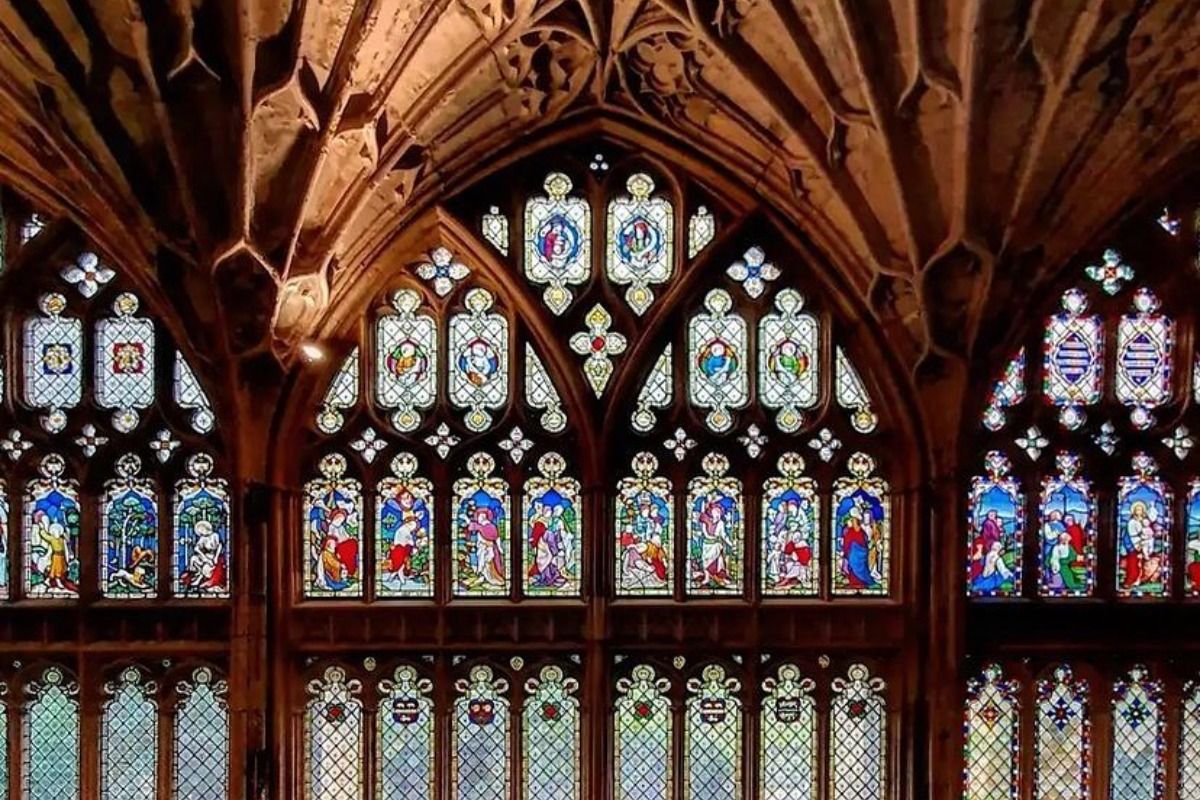 Do you get nostalgic thinking about Harry, Hermione, and Ron, well..you’re not alone. (Picture Credit: Gloucester Cathedral/Instagram)

For the first two Harry Potter films, as well as a brief appearance in the sixth, Gloucester Cathedral served as the oh-so-magical Hogwarts School of Witchcraft and Wizardry. The main hall of Gloucester Cathedral is the most visually spectacular aspect of the cathedral, notwithstanding the lack of Harry Potter filming sites. It would have made an amazing Hogwarts Great Hall, with its towering ceilings and golden hanging light bulbs!

Must know: Gloucester Cathedral is open all year and entry is free. 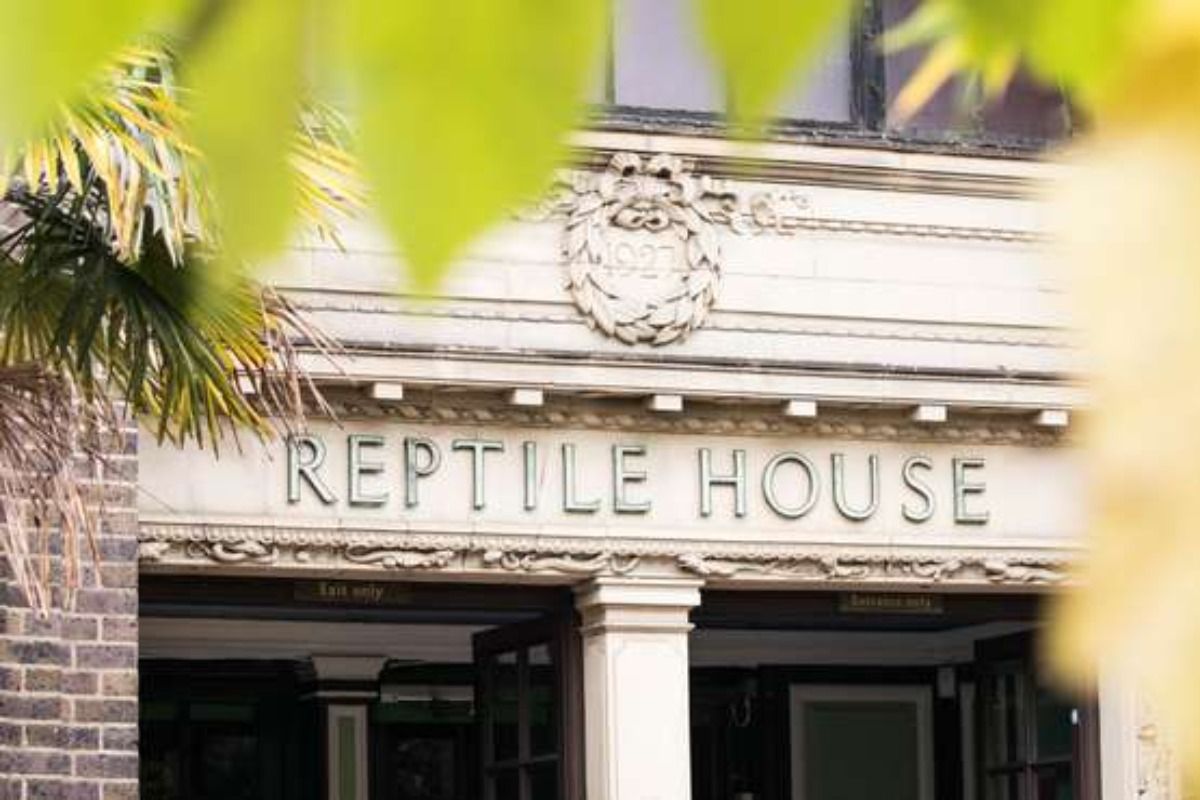 From the very beginning of Harry Potter and the Philosopher’s Stone, when Harry visits the zoo with the Dursleys, you’ll recall London Zoo. After an encounter with a python in the reptile house, he realises he has the capacity to communicate with snakes. He then unintentionally releases the python, trapping Dudley within!

Tip: Non-members must make a reservation for their visit ahead of time. The ticket for children under the age of three is still free. 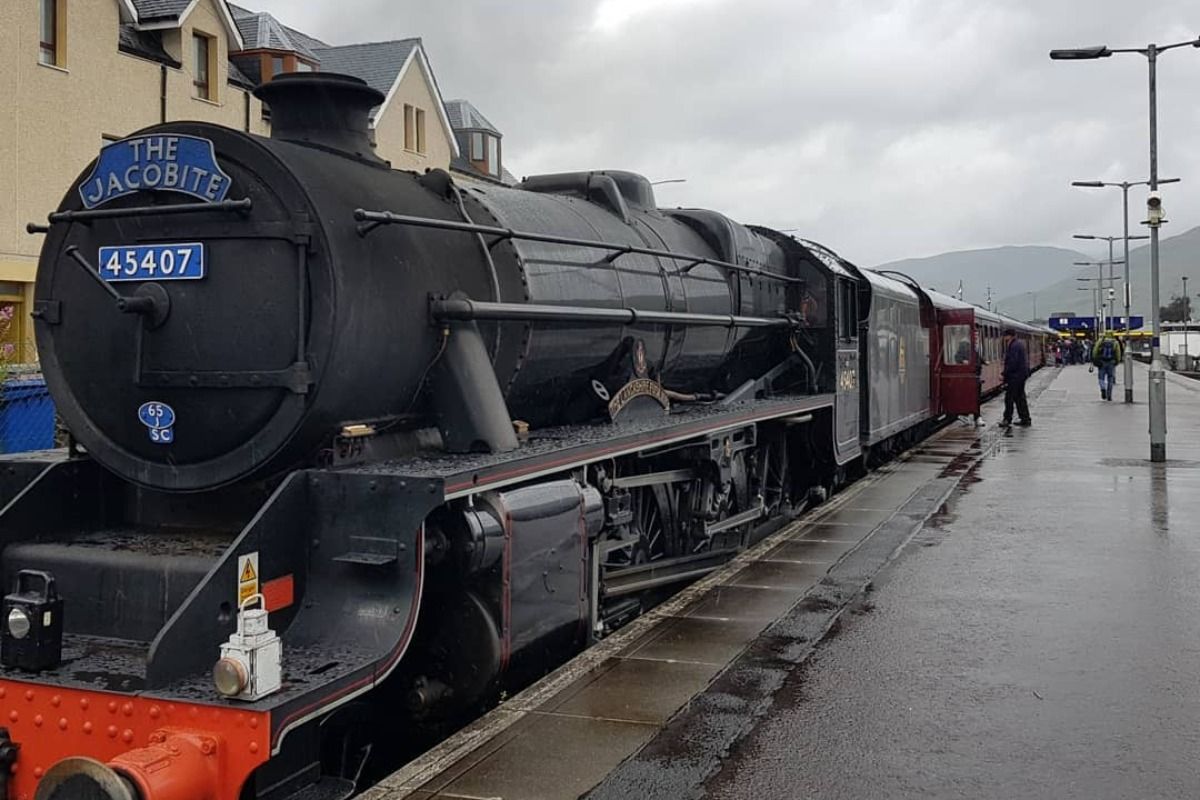 The Jacobite steam train’s 41-mile ride through the West Highland Line, which passes through lochs, mountains, and the renowned Glenfinnan Viaduct, is regarded as one of the world’s best railway journeys. Its popularity has grown in recent years as a result of its inclusion in the Harry Potter films. The Harry Potter Train is a steam train that runs between Fort William and Mallaig in Scotland’s West Highlands on a picturesque route. The Jacobite is its official name.

Must know: The train has a Harry Potter section, which is designed in the same style as first-class, but you’ll have your own private compartment with a door. 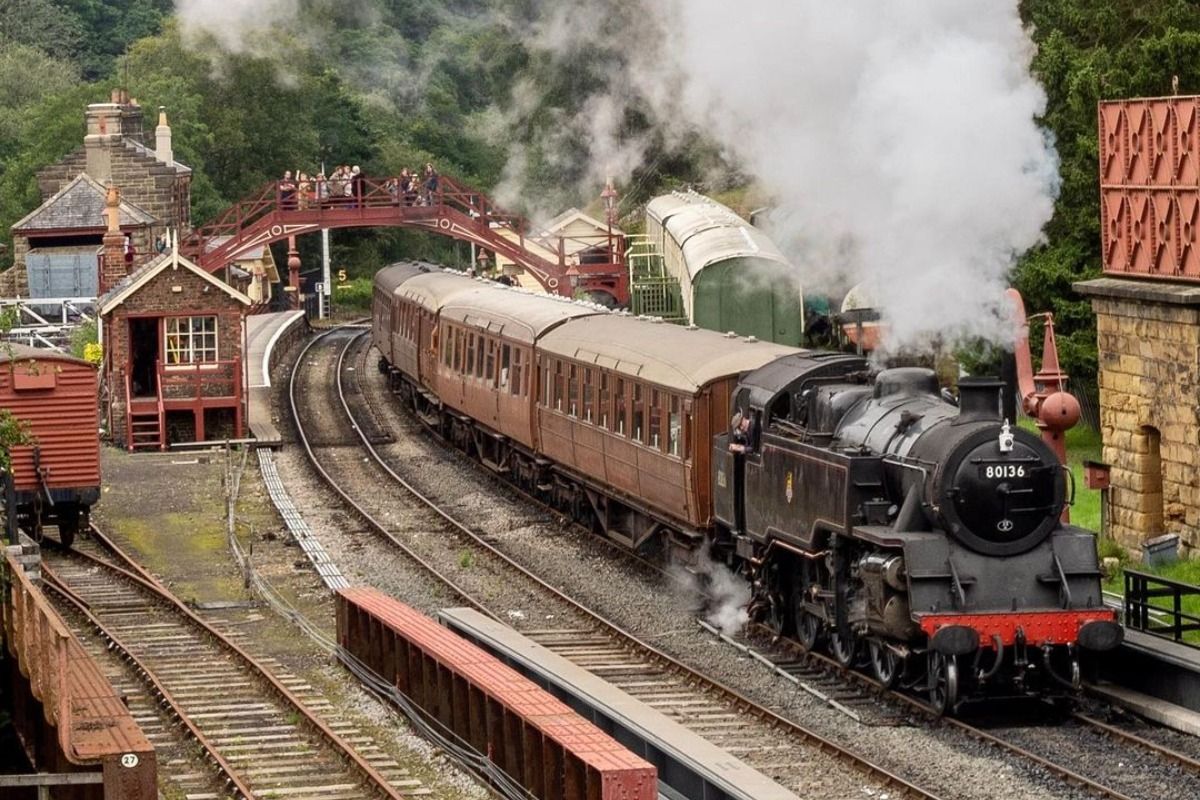 The charm in Goathland station is evident even after two decades. (Picture Credit: Janet Southerton/Instagram)

In Harry Potter and the Philosopher’s Stone, the Goathland station is the Hogsmeade station. So you see the station at the beginning of the film when Harry Potter boards the Hogwarts Express, and at the end when Hagrid waves the kids goodbye. Goathland station is a quaint little place that seems to have been frozen in time or possibly a moment that never existed at all. The station is decorated in bright reds and greens. It is concealed in the North Yorkshire Moors National Park, still sees steam trains.

Must know: Services are seasonal and normally operate from March to November, with only a few services available in the winter.

Despite the fact that Harry Potter’s plot is set in a magical, mostly mythical Britain, the film series incorporated numerous genuine locales as dramatic settings. Follow along in Harry Potter’s footsteps and discover the wonders of the Wizarding World!