Bigg Boss 15 housemates will be surprised to see Rakhi Sawant as a wildcard contestant. The actor who won several hearts with her stint in Bigg Boss 14, will be seen entertaining the audience with her funny antics and outspoken personality. The controversy queen will join the two other wildcards-Rashami Desai and Devoleena Bhattacharjee in Bigg Boss 14. Last year, the TRPs for the show were high because of her game plan and this year too, Rakhi has confirmed that she will enter the house to increase the TRP.

In one of her Instagram stories, Rakhi wrote: ‘Ab TRP increase hogi’. Have a look at the post: 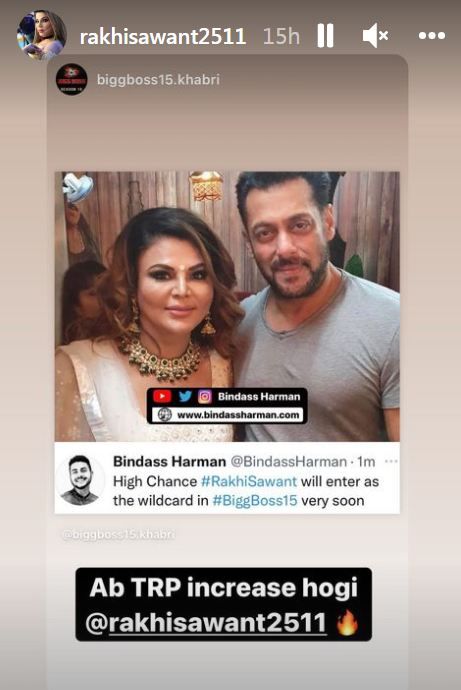 According to sources, it is being said that Rakhi Sawant has been quarantined with Rashami and Devoleena. We tried to reach the actor but she didn’t respond.

There was a report earlier that suggested the makers decided to bring Rakhi as another wild card because Bigg Boss Marathi contestant Abhijit Bichukale has tested positive for Covid 19. He was supposed to enter the house on Monday but couldn’t.

Watch this space for more updates on Bigg Boss 15.