Viral Video: A video of Buddhist monks dancing to Akshay Kumar’s latest song Aila Re Aila from his blockbuster hit film Sooryavanshi has brought a smile on the face of Akshay. The lead actor of the song also stumbled across the video and shared it on his Instagram stories. The video has been widely circulated on social media and has received over 11,000 likes so far.

The 54-year-old actor shared the viral video and expressed his happiness after seeing the monks dancing to his popular song. Sharing the video, he wrote, “This brought a huge smile on my face.” He went on to call a video ‘Best’. 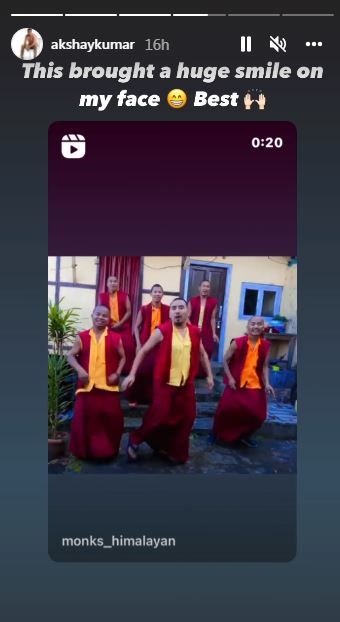 The video is also receiving praises from the netizens for adding their own twist to the song as they match the zeal and energy rhythm of the song.

Meanwhile, on the work front, Akshay is currently basking the success of Sooryavanshi. He has several films in his pipeline including Atrangi Re with Sara Ali Khan and Dhanush, Bachchan Pandey, Prithviraj, Gorkha, Raksha Bandhan, and Ram Setu.