Mumbai: Ever since Bigg Boss 15 premiered, there are rumours of Anushka Dandekar entering the show. While her ex aka Karan Kundrra is already locked inside the controversial reality show, there are speculations if Anushka will enter the show too. However, on Sunday, Anushka opened up about the same during an ‘Ask Me Anything’ session on Instagram and revealed that she will never enter the show. The actor also added that Bigg Boss is not ‘her thing’ and that she has never been approached for the show. Anushka further mentioned that she will not participate in Bigg Boss just for the sake of ‘people’s entertainment.’

“Got offered Bigg Boss 15?”. To this Anusha wrote a long note explaining her stance on the show. She wrote, “Once again, coz I have so many questions on it everywhere…and I’m even told I’m spoken about in the house! Wow! I’ll clarify again! I AM NOT GOING ON BIGG BOSS AND I NEVER WILL! I DO NOT LIKE TO SAY NEVER, BUT THIS I AM OKAY WITH. I DO NOT WANT TO GO, IT’s NEVER BEEN MY THING! AND NO I DO NOT WATCH THE SHOW ! THEY HAVE NEVER EVEN APPROACHED ME TO BE ON IT BECAUSE THEY KNOW I’LL SAY NO! I ALSO LOVE MY LIFE THE WAY IT IS. I WILL NOT GO JUST FOR PEOPLE’S IDEA OF ENTERTAINMENT!” Anushka wrote. 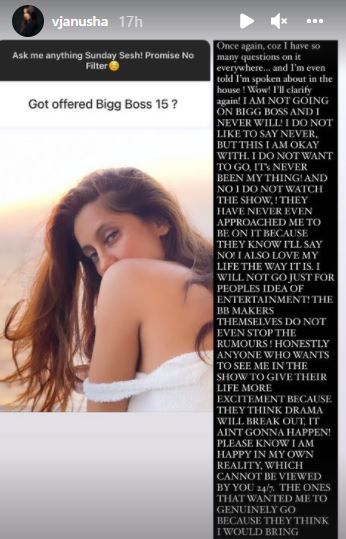 Anushka further added she is happy in her own reality and that people who are thinking her entry in Bigg Boss 15 will bring ‘drama’ are wrong. “THE BB MAKERS THEMSELVES DO NOT EVEN STOP THE RUMOURS! HONESTLY ANYONE WHO WANTS TO SEE ME IN THE SHOW TO GIVE THEIR LIFE MORE EXCITEMENT BECAUSE THEY THINK DRAMA WILL BREAK OUT, IT AIN’T GONNA HAPPEN! PLEASE KNOW I AM HAPPY IN MY OWN REALITY, WHICH CANNOT BE VIEWED BY YOU 24/7. THE ONES THAT WANTED ME TO GENUINELY GO BECAUSE THEY THINK I WOULD BRING POSITIVE VIBES, THANK YOU, I’LL STILL BE RIGHT HERE GIVING AS MUCH AS I CAN,” Anushka concluded.

Anushka and Karan have dated each other for over three years. However, the two broke up in 2020 after Anushka alleged that Karan cheated on her, a charge denied by Bigg Boss fame.