Mumbai: Veteran Marathi actor Madhavi Gogate passed away on November 21. Reportedly, the actor was tested positive for coronavirus a few days back and was admitted to Seven Hills hospital in Mumbai. However, her condition deteriorated on Sunday following which she breathed her last. She was 58.

The news of her death was confirmed by her Anupamaa co-star Alpana Buch (Baa) on social media. Alpana shared a picture of the veteran actor and wrote, “Madhaviji this is not done..actor can not take exit before scene gets over…we will miss you on Anupamaa set…your cute smile.. sweet voice…n humor…we will all miss you.”

Even Anupama aka Rupali Ganguly mourned the loss of her on-screen mother. Rupali shared a picture of Madhavi Gogate and wrote, “So much left unsaid. Sadgati Madhavi ji.” 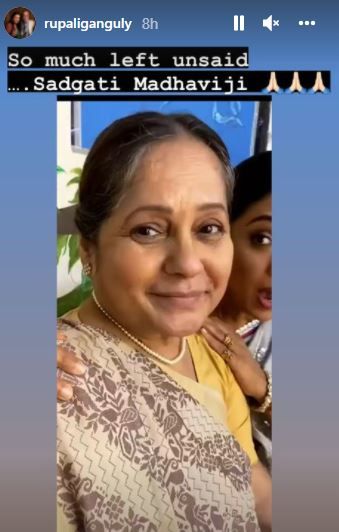 Madhavi Gogate used to play Anupama’s mother’s role in the popular show. However, she was recently replaced by Savita Prabhune. Madhavi has worked in several films and television shows. She rose to fame with the Marathi film Ghanchakkar. Apart from this, Madhavi was also seen in shows like Koi Apna Sa, Aisa Kabhi Socha Na Tha, Kaal Bhairav Rahasya and Kahin Toh Hoga among others.