Mumbai: Bollywood actor Rhea Chakraborty, who was arrested last year in the drugs case after boyfriend Sushant Singh Rajput’s death, has shared a cryptic post on Wednesday, amid Aryan Khan’s bail hearing in Mumbai’s session court. The post read: “Grow through what you go through.” Rhea’s name came during the hearing.

Have a look here: 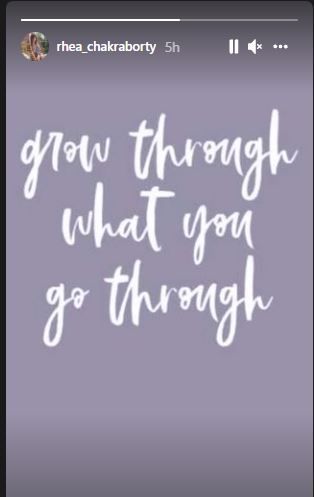 A report in Bar and Bench stated that the ASG brought up the charges put on Rhea Chakraborty to state how the charges were non-bailable. Advocate Satish Maneshinde referred Chakraborty’s case while arguing for bail of Khan.

The Mumbai special court has started the hearing at 2:45 pm on October 13 in connection with the seizure of banned drugs on rave party. The bail application is being heard in Special Narcotic Drugs and Psychotropic Substances Act (NDPS). In the court, Amit Desai fought for Aryan Khan and further revealed that the 22-year-old didn’t know anyone in the party as he was invited by Prateek Gabba, who has not been arrested. Desai argued in the court that there is no connection between Aryan and the recovery made by NCB.

Aryan’s lawyer concluded, “The allegation of illicit trafficking is inherently absurd. This boy who has nothing, not even on the vessels. It is a false allegations. This is a very serious term that they have dumped on Aryan Khan. I have no doubt that my friends know what is illicit trafficking according to the NDPS act.”