Mumbai: Ahead of their wedding, Richa Chadha and Ali Fazal shared a lovey-dovey photo on Monday and got trolled as one of the Twitter user claimed that her marriage will not last long and will get divorced just like actor Aamir Khan. Reacting on the same, Richa gave a befitting reply to the user that he’ll never forget. The user wrote, “तुम्हारा तलाक कब हो रहा है बताओ क्योकी तुम्हारी शादी आमिर खान की तरह ज्यादा दिन टिकने वाली नही है (When are you getting divorced? Tell us. Your marriage is not going to last long, just like Aamir Khan’s)”.

To which, Richa replied, “Sarvesh, forget about me, are you losing your mind because no one married you willingly? In your case, it must have been the girl who asked for dowry. Neither do you have looks nor intelligence and you are also poor? Your mother must have switched from LPG to an earthen stove. My regards to you, aunty. What kind of s**t-like devil you have brought into this world? This unemployed, pitiable person can dare to speak only here.” 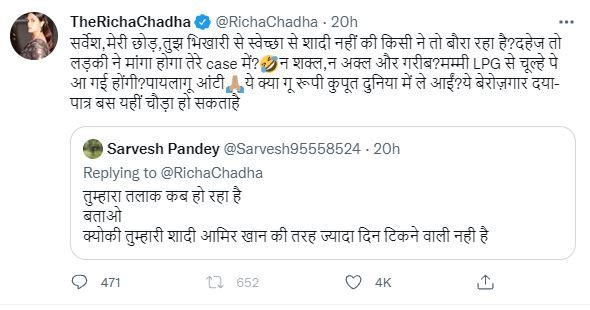 Ali Fazal has been in a relationship with actor Richa Chadha, though their marriage plans had to be abandoned due to the pandemic. They did not send out the invites but had finalised everything else, which they had to cancel. Richa was quoted saying, “Ali and I were organising everything ourselves. The invites were yet to be sent out, but we had finalised other things, which had to be cancelled. Now, we will take a call only when normalcy returns.”