Aryan Khan Case Latest Update: Amidst the ongoing controversy of superstar Shah Rukh Khan’s son Aryan Khan’s arrest in an alleged drug case by the Narcotics Control Bureau (NCB), music composer Vishal Dadlani and actor Shekhar Suman have come forward to extend his support to the superstar’s family by giving out a major statements. Shah Rukh Khan and his wife Gauri are going through a difficult time, ever since their elder son Aryan was nabbed by the Narcotics Control Bureau (NCB) in a drug raid on October 3. The bail plea of Aryan Khan, who was arrested on October 3, was also denied by a Mumbai Court on October 8, which has sent shockwaves all over the nation.

Aryan Khan has now been taken to the quarantine cell of the Arthur Road Jail with two other people. Fans and fellow friends from the film industry have been backing SRK in this matter, ever since the news has come out. The latest celebs who have come forward to extend their support to SRK are music composer Vishal Dadlani and actor Shekhar Suman.

If Composers count, I am.

https://platform.twitter.com/widgets.js
Shekhar said, “My heart goes out to Shahrukh Khan and Gauri Khan. As a parent i can totally understand what they are going thru. It‘s not easy for parents to go thru this kind of torment and ordeal no matter what @iamsrk”. In his further tweets, Suman also went on to reveal that SRK was the only one who had reached out to him after his 11-year-old son passed away back then. “When i lost my elder son Aayush at age 11 Shahrukh Khan was the only actor who came to me personally while i was shooting at film city, hugged me and conveyed his condolences. Im extremely pained to know what he must be going thru as a father @iamsrk”, Suman wrote. 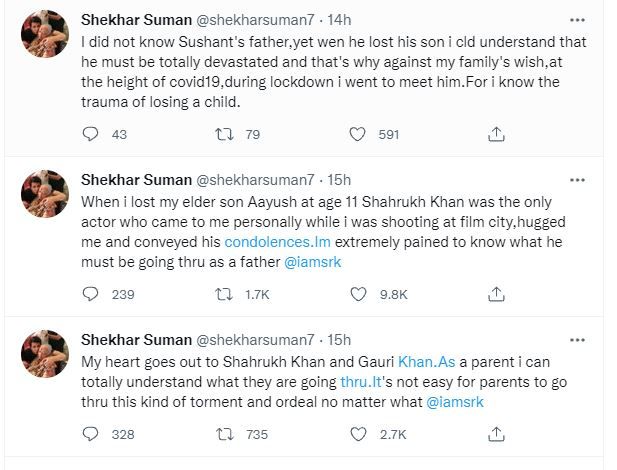 Meanwhile, SRK’s son Aryan is currently in 14-day judicial custody. His legal team has moved the Sessions Court and his bail hearing is likely to be on Monday, October 11.