Aryan Khan Bail Plea LIVE UPDATES: Aryan Khan, son of Bollywood superstar Shah Rukh Khan, was sent to 14-day judicial custody on Thursday night after the Esplanade court rejected NCB’s plea for continuing its custody of the 23-year-old. Along with Aryan, his friend Arbaaz Merchant, Munmun Dhamecha, and five others were remanded in judicial custody on Thursday which means that a plea for their bail can now be filed and heard on Friday.

Aryan was kept at the NCB office under the custody of NCB Zonal director Sameer Wankhede on Thursday night after the court said that the jail authorities would not accept an accused after 7 pm without the mandatory COVID reports. It also mentioned that their bail pleas will be heard on Friday after additional solicitor general Anil Singh, representing the NCB, said he would argue against the maintainability before the magistrate and file a written reply.

While announcing the judicial custody to Aryan and six others, the additional chief metropolitan magistrate RM Nerlikar said in his order: “No doubt it is the duty of NCB to investigate, but simply remanding accused to police custody would be violating the fundamental right of accused under the Constitution,” reported Times of India.

Will Aryan Khan Get Bail? His lawyer Satish Maneshinde argues in court. Check out the LIVE UPDATES from Mumbai Cruise Drugs Case here:

02:50 pm – Picture of Aryan Khan from outside the Arthur Road jail. 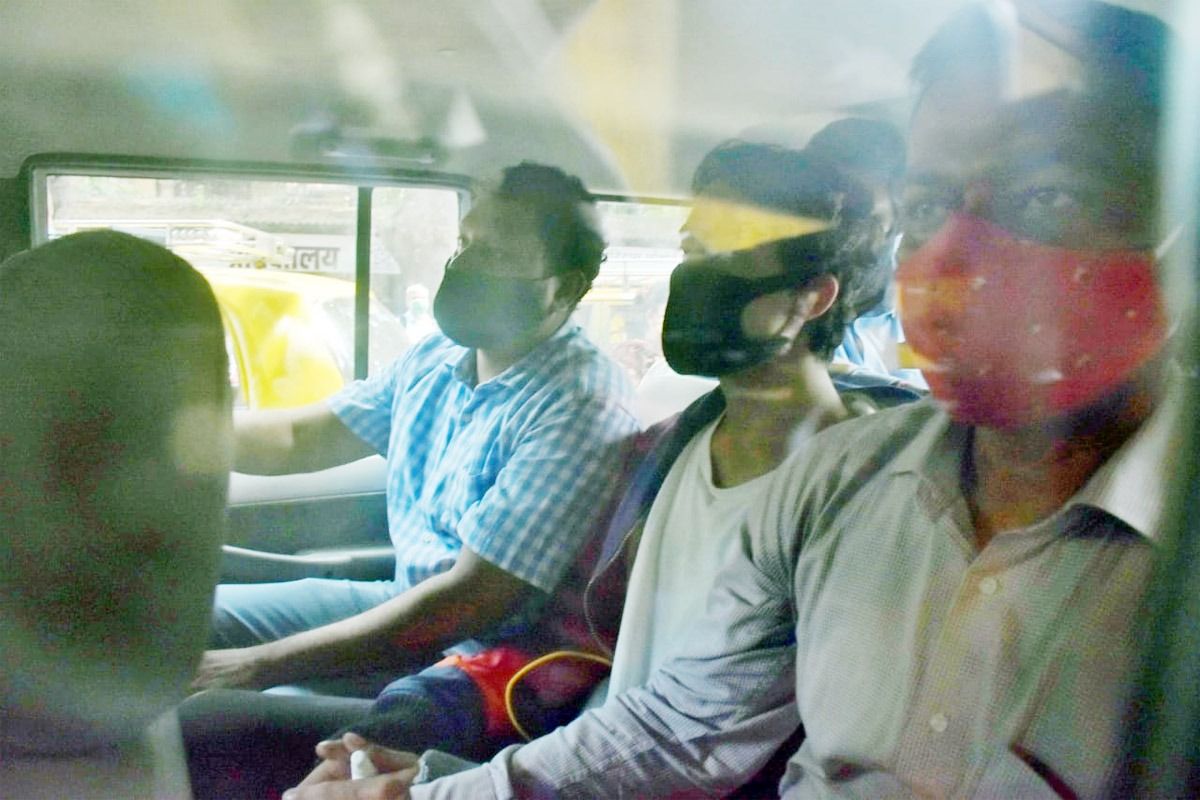 02:40 pm – Satish Maneshinde continues to argue for the bail. He says that there is nothing major that has emerged in the NCB’s investigation against Aryan so far and that’s because ‘there is nothing.’

02:25 pm – “Contact with Archit (who has also been arrested) was revealed on the first day and they took their own time. Their contention is I am required for confrontation. That has been rejected by the Supreme Court. Top Court says ‘interrogation, investigation, confrontation can take place when someone is released on bail’. Nothing much has emerged in the five days and that is because there is nothing. I am from a respectable family and I am not likely to abscond. I am based in Mumbai. Accused who they say is connected to me is already in their custody,” says Satish Maneshinde on behalf of Aryan Khan.

02:20 pm – Satish Maneshinde reads Aryan Khan’s statement, “I am 23-year-old with no antecedents. I happen to be from Bollywood. When I reached there, they searched me and nothing was found. They went through my mobile and they downloaded all the data. Mobile has been sent for forensic examination. From the first day till today nothing has emerged.”

02:11 pm – “A person should not be compelled to go to jail. Supreme Court says one cannot play around with the fundamental rights of the citizens,” says Maneshinde. While continuing to argue about no recovery being made from Aryan, he says that ‘not even one gram, once ounce and so much capital is being made out of it.’ He adds, “power to grant regular bail means power to grant interim bail.”

02:01 pm – Aryan Khan and the others accused in the Mumbai drugs case reach the Arthur Road Jail in Mumbai.

01: 57 pm – Satish Maneshinde continues to argue that ‘there is no material’ found to ‘prosecute’. “Not a single material to disclose any commit, any conspiracy. No material has been found on me or in my bag. Where is the material to prosecute?”

01: 56 pm – Youths do not foresee the link between actions today and their consequences tomorrow. The youth deserve the opportunity to get back their freedom. Judgments on how law dealt with those who had smaller quantities recovered from them, need to be seen. Law is evolving: Maneshinde

01:55 pm – Aryan Khan’s lawyer, Satish Maneshinde, tells the court that there is no case against his client. “There is not even material before your honour that makes a case for consumption except for the statement they took from me,” he says as per the NDTV reports.

01:53 pm – Satish Maneshinde tells the court that it has the power to grant bail to the accused and the Magistrate is competent to release an accused if the sentence for the offence alleged is not punishable with death or life imprisonment.

01:45 pm – In other news, Senior advocate in Supreme Court, Vikas Singh, who is also representing late Sushant Singh Rajput’s family in his alleged suicide case, talked to a news channel and said that the NCB has violated the law by arresting and keeping Aryan Khan in custody for four days in the absence of any recovery.

01:25 pm – Aryan Khan’s lawyer Satish Maneshinde argues ‘why is the Union of India’ so interested in a case where no recovery has been made. Additional Solicitor General, Anil Singh, denies the argument.

12:55 pm – Bail pleas of the three accused including Aryan Khan to be heard in a few minutes. Stay tuned!

12:40 pm – Actor Salman Khan’s ex-girlfriend Somy Ali supports Aryan Khan. She writes a note on social media demanding decriminalising of drugs and mentioning that ‘No One is a Damn Saint’. Read the full story here:

12:10 pm – Shah Rukh Khan and Gauri Khan’s industry friends wish Gauri on her birthday, hoping for a ‘best present’ today. In a special post made on Instagram, Farah Khan wrote, “The strength of a mother is second to none! The prayers of a parent can move mountains & part seas.. HAPPY BIRTHDAY to the strongest mother and woman iv personally witnessed this past week.. @gaurikhan here s wishing you the best birthday present today ♥️♥️♥️ (sic).” Sussanne Khan wrote, “Gods Love and Grace will always be on your and your loved ones heads.. I Love you loads ♥️♥️♥️🧿🧿🧿🧿🧿🤍🤍🤍🤍 #Gstar #20yearsandbeyond #MyNo8shine #limitless (sic)”

11:35 am – Aryan Khan and the other 7 accused in the drugs case have been tested negative for COVID-19. They have been sent to the Arthur Road jail from where they will be going to the court for a bail hearing at around 12:30 pm.

09:50 am – Aryan Khan’s bail plea to be heard this afternoon. Meanwhile, NCB has reportedly planned to ‘fight hard’ to keep Aryan in jail, reported India Today. However, he is likely to be released considering no commercial quantity of drugs was recovered from him.

09:10 am – Aryan Khan is likely to get bail in the Mumbai drugs case today considering no drugs were seized from him. His friends Arbaaz Merchant and Munmun Dhamecha are also likely to get bail since the quantity of drugs recovered from them is low.

09:00 am – In the bail plea to be heard today, Khan’s lawyer Satish Maneshinde would argue that there were no drugs seized from his client and he has only been arrested on the basis of some WhatsApp chats. He would further mention that Aryan was only a guest at the party and even though 5 gms of drugs have been seized from his friend Arbaaz, Aryan had no involvement in his activities. It will also be argued that Aryan attended the party at the very last minute and he had only gone there to add ‘glamour’ at the party.