Navratri 2021’s Best Bollywood Songs For Garba and Dandiya: Navratri 2021 has started from Thursday, October 7 and will end on October 15, 2021. The final three days — Ashtami, Navami, and Dashami — will begin with Ashtami falling on October 13. This is followed by Navami on October 14 and Dashami on October 15. Festivals have seen a washout due to the COVID-19 pandemic. The situation has improved gradually, but uncertainty still looms over the fate of grand celebrations. As Navaratri starts from today, unfortunately, Garba and dandiya, the main highlights of the nine-day festival are banned in several areas in a bid to control the spread of coronavirus. If you don’t want such restrictions to dampen your festive mood then right away add the below-mentioned Garba songs to your playlist to celebrate Navaratri 2021 in the comfort of your home.

Dance to the tunes of these Garba songs this Navratri:

Dholi Taro Dhol Baaje: Thanks to filmmaker Sanjay Leela Bhansali for giving us this evergreen festive song 20 years ago with his romantic film ‘Hum Dil De Chuke Sanam’, which stars Aishwarya Rai Bachchan, Salman Khan and Ajay Devgn in the lead roles. Sung by Vinod Rathod and Kavita Krishnamurthy, the track instantly sets you in an energetic mode. It’s been over two decades and people still like every beat of this song and try to dance as Salman and Aishwarya did in the particular track.


Kesariyo Rang: Navaratri festivities are incomplete without the songs of popular folk singer Falguni Pathak. She has entertained us with several Garba songs over the years. ‘Kesariyo Rang’ is one of her songs that people definitely play to get the Garba vibe on. ‘Khel Khel Re Bhawani Maa’, ‘Radha Ne Shyam’, ‘Indhana Winva’, and ‘Vithala’ are also other popular Gujarati Garba songs of Falguni Pathak, who is known as Garba queen.

Udi Udi Jaye: Shah Rukh Khan has made several traditional dance forms all the more special in his Bollywood films. With ‘Udi Udi Jaye’ song from his film ‘Raees’, he marked his debut Garba performance on screen. His chemistry with actor Mahira Khan in the colourful song will definitely prompt you to pick up your dandiya sticks and shake a leg with your partner.

Chogada Tara: Salman Khan’s brother-in-law Aayush Sharma’s debut film ‘Loveyatri’ didn’t do well at box-office but its song ‘Chogada Tara’ was definitely a hit. Sung by Darshan Raval and Asees Kaur, the track is filled with Gujarati words and beats that will make everyone feel hit the dance floor. 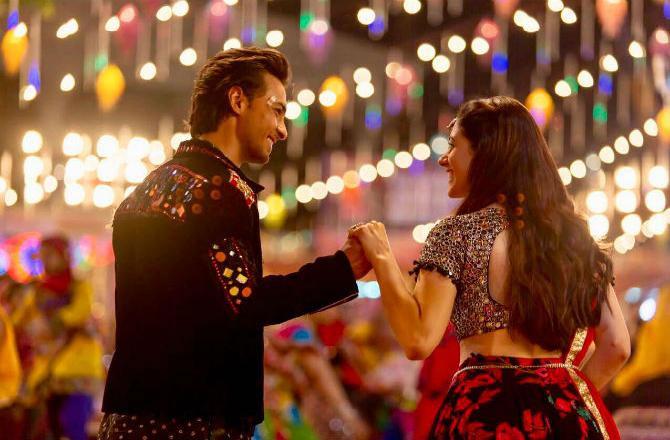 Nagada Sang Dhol: Power couple Ranveer Singh and Deepika Padukone-starrer ‘Nagada Sang Dhol’ from their movie ‘Ram-Leela’ is a perfect song to listen to during Navratri. Sung by Shreya Ghoshal and Osman Mir, the catchy track begins with a teary-eyed Deepika lighting up diyas and performing Garba in a vengeance.

Garbe Ki Raat: The sky is the limit when it comes to making your festivals memorable with a dash of songs. Making Navratri 2021 special for everyone, singer Rahul Vaidya is all set to come up with his new song ‘Garbe Ki Raat’, featuring none other than Nia Sharma.

These videos will help you to learn easy steps of the Garba and match your feet and hands to perform during Dandiya nights. Happy Navratri!