#DeshKaZee: Bollywood filmmakers Subhash Ghai, Boney Kapoor, Satish Kaushik, Ashoke Pandit in their recent tweets, have supported Zee managing director Punit Goenka and founder Dr Subhash Chandra amid the ZEEL-Sony mega-merger. Ever since merger happened between ZEE Entertainment Enterprises Limited (ZEEL) and Sony Pictures Networks India, Invesco, the largest shareholder in Zee Entertainment, called for the removal of managing director amid a deepening divide between the fund and the company’s founders. Ashoke Pandit reacted to the reports and supported Goenka on Twitter. He wrote, “#ZeeTV hs bn one of the major pillars of Indian entertainment industry. Its @subhashchandra ji’s vision which created so many job opportunities who r entertaining the country since a decade. Let’s nt allow #American & #Chinese investors to destroy its strength. @punitgoenka”.

#ZeeTV hs bn one of the major pillars of Indian entertainment industry .
Its @subhashchandra ji’s vision which created so many job opportunities who r entertaining the country since a decade .
Let’s nt allow #American & #Chinese investors to destroy its strength. @punitgoenka

Filmmakers Subhash Ghai, Boney Kapoor, Satish Kaushik and others have come out to support Punit Goenka and founder Subhash Chandra and said that they are the major pillars of the Indian entertainment industry.

Is it giving a wrong signal to future corporate culture? 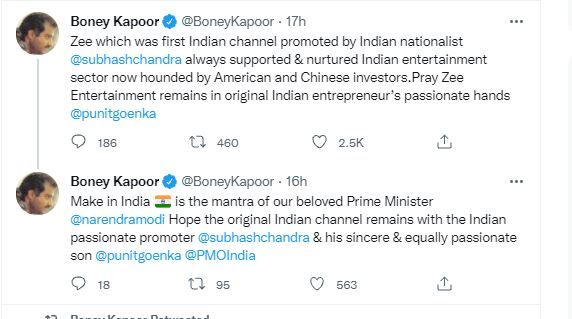 ZEE TV,first Indian channel cultivated by @subhashchandra to India’s biggest entertainment company has always been pioneer in Indian content.I wish that it continues to progress under the leadership of @punitgoenka & an all Indian Management and pray for a great future for them.

https://platform.twitter.com/widgets.js
Founder of Zee TV and Zee Media, Dr Subhash Chandra on Tuesday broke his silence on media reports that cast aspersions on the proposed ZEEL-SONY mega-merger and challenged Invesco to come out with the truth and credentials of the six members whom it wants on the board. In a video message issued, Dr Chandra also highlighted how the proposed merger plan was in the best interest of all shareholders and dared Invesco to reveal their plan if they had any.

“No matter who runs ZEEL but the company, to which I’ve and many of my friends have given their blood and sweat for the past 30 years, should be in the hands of someone under whose leadership the organisation should prosper and shareholders should be benefitted since I don’t have any profit or loss associated with this,” Dr Subhash Chandra said.

Dr Subhash Chandra tore into Invesco, highlighting how some parties were only involved in taking down the people who are running it and had no alternative plan. He further said, “You want to remove Punit Goenka? Okay, fine but what next? Have you done any deal with someone? The six directors proposed by them – what’s their background? Do they have any relation with any particular company that wants to take over?”