BTS’ Butter makes a comeback on the top spot of Billboard Hot 100 songs chart for a 10th total week. The song returns on the number one spot after the release of its new Megan Thee Stallion remix. As per MRC Data, Butter, that released on HYBE, BigHit Music, and Columbia Records, drew 12.2 million radio airplay audience impressions, and 10.7 million US streams. By 1 st week of September, butter sold 143,000 downloads. 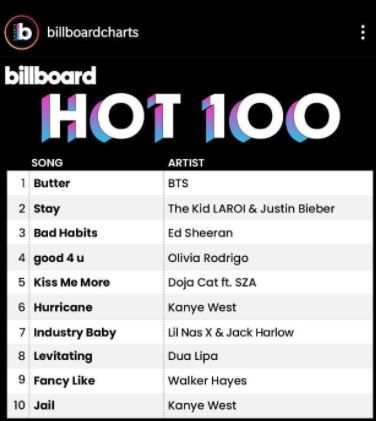 The song also debuted number one on the charts soon after its release in May and became the longest-running song of 2021 on the Billboard Hot100 charts.

Recently, BTS released a collaboration for their song ‘Butter’ with the American rapper Meghan Thee Stallion after Grammy awards winner took her agency to court for not letting her release the mix. The song became an instant hit among fans and non-fans. Later, they showed support by painting stan Twitter pink.

K-Pop super band BTS have earlier talked about their global stardom and said that they don’t necessarily feel at home with their success. Using the Korean expression meaning lack of ability or small-mindedness, Suga told Billboard magazine: “We are not exceptional people — our plate is small. We’re these rice-bowl-size guys getting so much poured into it. It’s overflowing.” V added: “The pressure has been overwhelming.”