Mumbai: Bollywood actor Kartik Aaryan has raised the temperatures with his hotness from a recent photoshoot by Dabboo Ratnani. We are impressed, like always to see something unique this time. Now, before you get any more excited, let us tell you that this is a stunning shot for Dabboo Ratnani’s calendar. Kartik Aaryan can be seen sporting a bad guy avatar with his long hair styled in a messy way. The actor wore a black furry coat and accessorized his look with layered necklaces. But, what caught our attention was his nail paint. For this shoot, Aaryan wore black nail polish.

Soon after the pictures were posted on Instagram, Kartik Aaryan’s fans and friends from the industry started pouring love on it. Farah Khan dropped a hilarious comment that read, “Kuch lete kyon nahi??” Daboo Ratnani also couldn’t stop raving about Kartik, as he posted the photo along with the caption, “Look Hot, Be Cool सेक्सी मुंडा कार्तिक @kartikaaryan for #dabbooratnanicalendar #2021.” 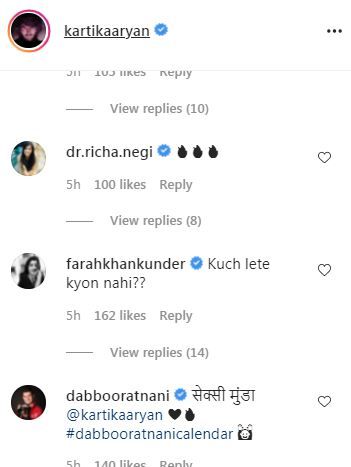 Meanwhile, on the work front, Kartik will be next seen in Dhamaka and Bhool Bhulaiya 2. He also announced a new film titled ‘Satyanarayan Ki Katha’. Touted to be an epic love story, Kartik shared the very first glimpse of the film on social media and wrote, “A story close to my heart #SatyanarayanKiKatha A special film with special people. (sic)” The film marks the Bollywood debut of Sameer Vidwans, who helmed the Nation Award-winning 2017 Marathi drama, Anandi Gopal. The makers are yet to announce the female lead in the film.