Mumbai: Actor and host Rannvijay Singha and his wife Priyanka Singha have become parents to a baby boy. The couple welcomed their baby boy on Monday, July 12. 4-year-old Kainaat gets a little brother! The Roadies judge took to his Instagram to announce the good news and shared a picture of his newborn’s red jersey with a matching pair of shoes. While sharing the post, he captioned it as, “#satnamwaheguruੴ”. Rannvijay Singh’s family, colleagues, friends from the industry have poured in the best congratulatory messages on the comment section. Neha Dhupia, Nikhil Chinapa, Prince Narula, Varun Sood, dropped heart emojis for him and also congratulated him.

Rannvijay’s elder daughter Kainaat is super excited about her sibling’s arrival. Rannvijay told E-Times, “Kainaat is super excited and says all sorts of sweet things that surprise us. Once she said, ‘I will make a tent in my room for the baby and take care of the baby. You guys can go out for dinners and work.’ We told her you are just four! To which she said, ‘I am four and a half.’ It is so heart-warming to hear her. We tell her that we are getting the baby for her, so she feels that she has to take care of her sibling”.

Rannvijay becomes a father again and he talked about his excitement level. He said, “Some people say that becoming a father again means the excitement level would be less, but that’s not true. I am equally excited to be a father now, as I was when we had our first child. And with my daughter being four now, as parents we realized that she needs a sibling.” 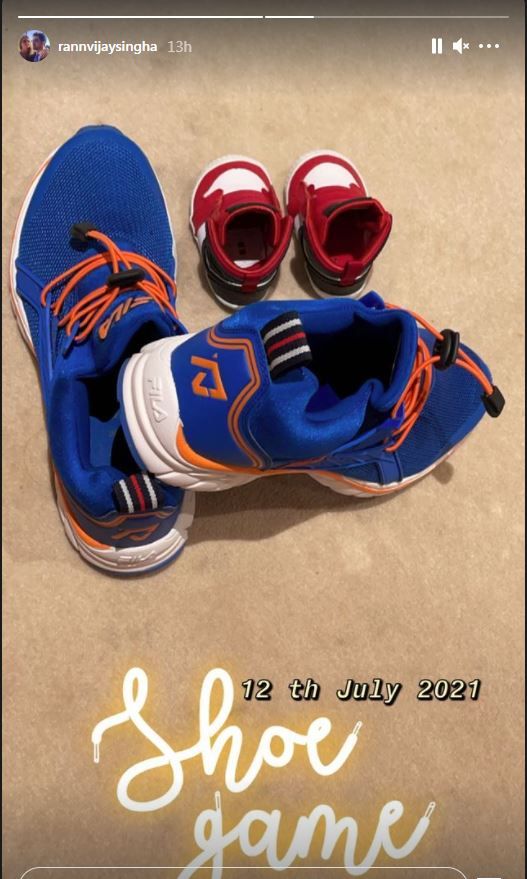 Nikhil commented: “Congratulations guys!!! Sending you all our love ❤️ for Kai’s little brother and the new addition to your lovely family.”

Other celebrities like Gauahar Khan, Yuvika Chaudhary, Kishwer Merchant also wished him on the arrival of a new member in the family.

Rannvijay and Priyanka got married in the year 2014 and welcomed their first child, daughter Kainaat in January 2017. Recently, a couple of their friends hosted a beautiful baby shower in London and Rannvijay had shared pics from the event.

On the work front, Rannvijay Singha was last seen in Roadies and is currently hosting Splitsvilla 13 along with Bollywood beauty Sunny Leone. He has been ruling OTT platform with his hit series Sumer Singh Case Files Kaushiki, Girlfriends, Mismatched and Forbidden Love.

Our heartiest congratulations to Rannvijay Singha and Prianka!