Indian Idol 12 viewers saw the eviction of the contestant, Ashish Kulkarni, on Sunday, leaving fans upset who call the elimination process ‘worst’. Soon after the elimination, Indian Idol’s host Aditya Narayan wrote a long emotional note for Ashish where he mentioned that he is looking forward to work with Ashish and Pawandeep Rajan as a composer. Aditya also told that the stage of Indian Idol 12 would miss him greatly. The note read, “Kulku mere bhai. You know I have immense love for you and complete faith in your abilities. I am thrilled to be rendering your first song as a composer along with @pawandeeprajan. Aur bahut saara music banaana hai saath mein. Keep dreaming, believing and achieving. The Indian Idol stage will truly miss your presence.”

Ashish Kulkarni replied back saying, ‘Thank You Bhaiyaa’. Indian Idol 12 have invited several controversies that have attracted more limelight than the singing of the contestants. 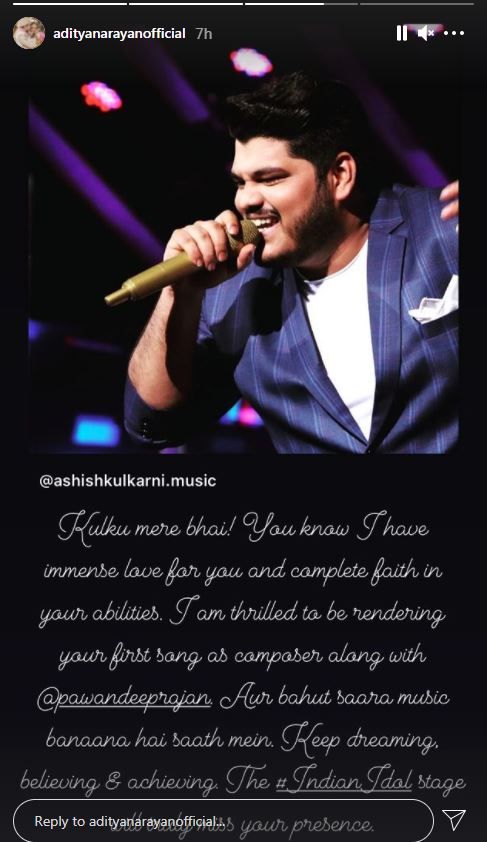 Indian Idol 12: Aditya Narayan reveals he is composing a song for Ashish Kulkarni and Pawandeep Rajan

In last weekend’s episode, all the contestants including Pawandeep Rajan, Arunita Kanjilal, Shanmukhapriya, and Sayli Kambli among others impressed the chief guest Asha Bhosle but it was Ashish who got eliminated towards the end. Ashish Kulkarni fans took to social media to express their confusion over Ashish’s elimination as they were expecting Shanmukhapriya’s eviction.  One user tweeted, “#IndianIdol a really unfair eviction #AshishKulkarni deserves to win the show #ShanmukhaPriya should throw out from the show @SonyTV (sic)”. Another user tweeted, “Kya yaar another good performer eliminated #AshishKulkarni #IndianIdol2021 makers plz let us know when will u eliminate #ShanMukhPriya so that i can resume watching full show (sic)”.