Mumbai: Ankita Lokhande organised a special puja at her home on her former boyfriend and actor Sushant Singh Rajput’s first death anniversary. She took to Instagram stories and shared a video of the same. In the video, it can be seen that the actress has held some holy havan at her home. 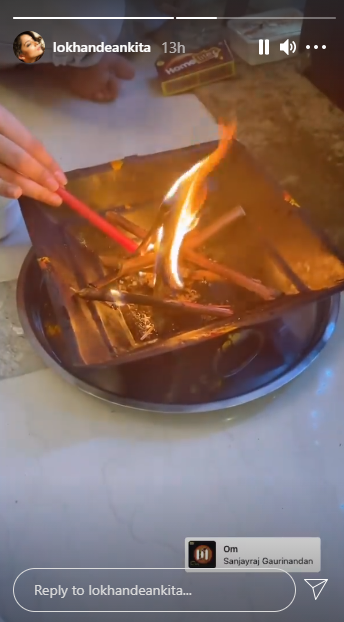 This comes a day after Ankita posted a few pictures on social media signaling her comeback on the same. Earlier this month, Ankita announced that she is taking a break from social media. “It’s not a goodbye, it’s a see you later,” she had written. The decision had left her fans shocked, with some people also attacking and questioning her timing i.e just days before Sushant’s death anniversary.  “Ankita knows that SSR death anniversary is round the corner, bahut publicity pa liya SSR ke naame pe! So let’s go underground and come back later. #hypocrite @lokhandeankita,” one of the SSR’s fans had written. On June 1, Ankita had also posted a story on her social media account and wrote ‘June’ with a broken heart emoji.

Soon after ‘coming back’ on social media, Ankita also posted a picture with her boyfriend Vicky Jain and wrote, ‘Perfect together.’

For the uninitiated, Ankita and Sushant worked together for Pavitra Rishta and dated each other even years after Sushant left the show. The two were in a relationship for six years until they broke up in 2016.

Sushant Singh Rajput was found dead in his Mumbai apartment on June 14, 2020. His sudden demise had left everyone in shock.