Pearl V Puri Rape and Molestation Case: TV actors Nia Sharma and Devoleena Bhattacharjee had an ugly argument on Twitter over Pearl V Puri’s rape and molestation case. Nia took to Instagram stories to publicly say sorry to Devoleena. Her note read, “My mom, brother and Ravi very lovingly told me I wasn’t right and considering 3 close ones can’t be wrong.. so here I go.. Hey @devoleena I may have crossed the line in being personal.. I’m sorry. It was impulsive. Hope you’ll forget it.”

Devoleena Bhattacharjee further accepted her apology and warmly replied saying even she is sorry for what she said:“Hey @niasharma90 that is ok. Forgive me too if I have hurt you anyway though that wasn’t my intention at all. Convey my regards to your mom, brother and Ravi. Stay safe & take care.”

Have a look at the Instagram posts shared by Nia Sharma and Devoleena: 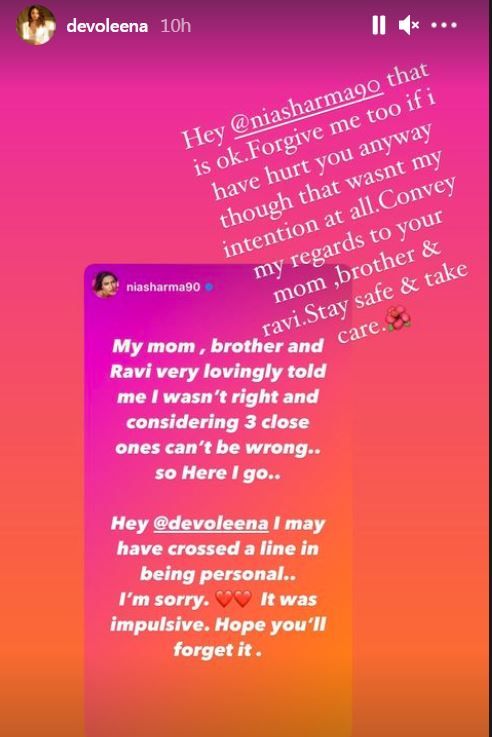 Pearl V Puri has been sent to judicial custody for 14 days. In a series of Tweets, Devoleena, who has neither supported Pearl nor the girl, slammed those who are cursing the minor and victim-shaming. Devoleena wrote, ‘If parents had taught humanity, then they would have thought 100 times before commenting like donkeys on mother’s Insta account of seven-year-old girl. “Kya yeh saabit kar paayee hai aap abhi tak? Aap sabko kya lagta hai @MumbaiPolice ne Time paas k liye arrest kiya hai? Unko masaala nahi cahiye aap sabki tarah.Let them do their business & you mind yours. Do u guys even know what POSCO Is?”