Mumbai: Actor Manoj Bajpayee has been associated with Amazon Prime Video through his popular web series, The Family Man, which has now come out with its highly applauded second season. The actor is all set to feature on Netflix original film Ray, which is an anthology of four stories inspired by Satyajit Ray. Though, it is often said that streaming platforms are always at war due to the high competition, the latest camaraderie by Netflix and Amazon Prime Video, proves it to be wrong.

Both the OTT platforms got engaged in a fun banter over Manoj Bajpayee’s debut with Netflix for his upcoming film, Ray. Following the trailer release of its upcoming film Ray, Netflix posted a quirky message on social media saying “@ManojBajpayee coming to a Netflix Series. We love that you are a part of this family, Man  – Ray” 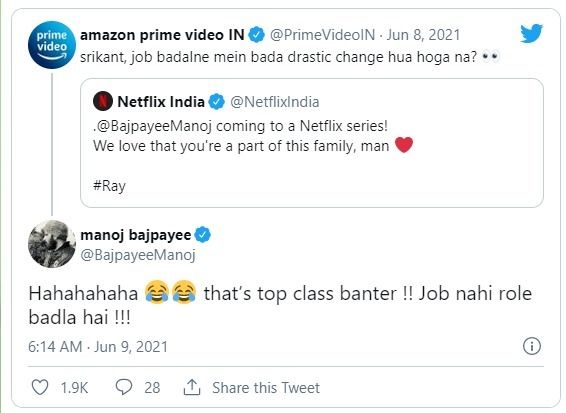 However, this is not the first time that Amazon Prime and Netflix have engaged in some of the most fun banter on social media. In 2020, when the world was waiting with bated breaths for the second season of Mirzapur 2, Netflix put out a video featuring Ali Fazal and Shriya Pilgaonkar. Fans inundated the comments asking about season 2; captioning the video, “@primevideoin Batao Bhai, log puch rahe hai”, to which Amazon Prime Video had cheekily replied tweeting “arey, seedha seedha bolo tumhe dekhna hai ?”. Netflix retorted to the same with “@yehhainmirzapur you say Guddu bablu we say Atapi Vatapi”.

Mirror Mirror on the wall, is this the friendliest rivalry of them all? Well, if history is anything to go by, we can bet on that for sure!