Mumbai: Bollywood actor Vicky Kaushal hasn’t been active on social media for a long time. On Tuesday, he took to his Instagram to flaunt his new haircut and captioned the post as “Baal mat kato…Arreeeyyy!!!” #iykyk”. Fans were so excited to see his presence on Instagram after so many days. They complimented the actor with heart and fire emojis. However, Katrina Kaif’s fans bombarded Vicky Kaushal’s post with comments like ‘jiju’ soon after the news of their relationship went viral.

On Wednesday, Katrina and Vicky were making headlines because Harshvardhan Kapoor confirmed that they are indeed together in a recent interview. In his latest interview with an entertainment portal, Harshvardhan Kapoor confirmed that his friends Vicky and Katrina are together. As soon as he declared, he knew he will be in trouble. While speaking at Zoom’s show By Invite Only Season 2 Kapoor said, “Vicky and Katrina are together, that’s true. Am I going to get in trouble for saying this? I don’t know.” The couple’s fans were beyond excited over the actor’s confirmation and this is for the first time that someone close to Vicky-Katrina confirmed that they are in a relationship. 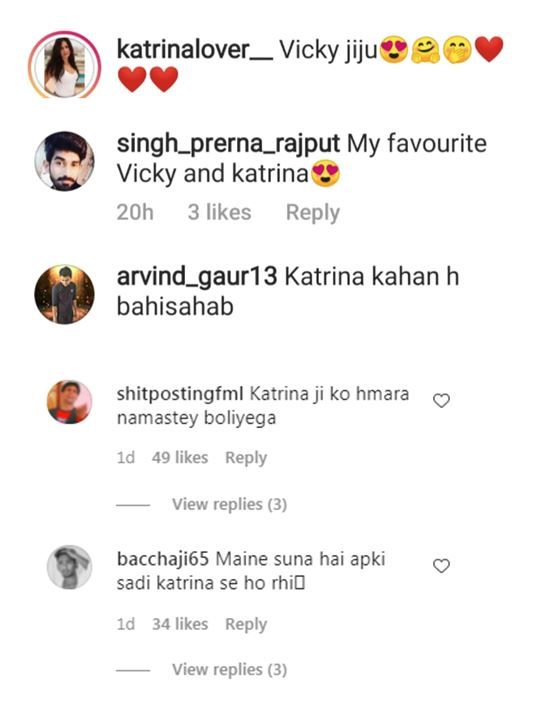 Vicky Kaushal and Katrina Kaif haven’t reacted to Harshvardhan’s statement as of now. On Tuesday, the paps spotted Vicky’s black Range Rover car leaving the premises of Katrina’s building. He arrived at Katrina’s residence at 3.30 in the afternoon and left at 8.30 in the evening.

Katrina and Vicky’s romance rumours sparked off after the duo were spotted together at a Holi bash last year. Post that, they have been spotted together several times. However, the rumoured couple has not confirmed their relationship in public yet.

On the work front, Katrina will be next seen in Phone Bhoot co-starring Ishaan Khatter and Siddhant Chaturvedi. She will also be seen in Rohit Shetty’s Sooryavanshi opposite Akshay Kumar. Vicky, on the other hand, will be seen in Sam Manekshaw’s biopic.