Sushant Singh Rajput Death Case: It will soon be a year to late actor Sushant Singh Rajput’s death. He died by suicide at his Bandra apartment on June 14, 2020. A lot happened in this year post the demise of the Kedarnath actor and several official agencies such as the Central Bureau of Investigation (CBI), Narcotics Control Bureau (NCB), Enforcement Directorate (ED) were involved and are still working on the SSR death case. Ahead of Sushant Singh Rajput’s death anniversary, his girlfriend Rhea Chakraborty’s statements and confession to NCB have been making headlines. Rhea was arrested by the narcotics department due to her links with the drug syndicate.

Zee News has got the access to Rhea Chakraborty’s NCB charge sheet where she has confessed some shocking allegations against Sushant’s sister and brother-in-law. The Chehre actor talked about the usage of the Clonazepam drug, and how she knew Sushant could have died when his sister Meetu Singh was living with him. Rhea mentioned in her statement that Sushant Singh Rajput was an addict since before she met him. Last but not the least, Rhea alleged that Sushant’s family was also involved in consuming drugs.

An excerpt of Rhea Chakraborty’s statement reads, “There are some conversation relation to uses and effect of Clonazepam. I would like to explain that above are prescription drugs prescribed by Dr Nikita Shah. Showik and I are seen here discussing the Google side effect of Clomnezepan.”

Rhea added, “On confirming with the doctor she confirmed to continue the prescription medicine as advised. Sushant was not doing well and his condition was worsening, hence, Showik was worried about Clomnezepan and its side effects.”

When Rhea talked about Sushant’s sister and brother-in-law. She said: “I would also like to add that on 08 June 2020, Sushant Singh Rajput received a WhatsApp msg from his sister Priyanka Singh telling him to take librium 10 mg, Nexito, etc. which are drugs under the NDPS Act, 1985. She has also provided a prescription from Dr Tarun who is a cardiologist and has marked Sushant for OPD patient, without consulting or meeting or online consultation with Sushant. These medicines are not to be given or administered without a psychiatrist consultation. These drugs could have caused his untimely death. Sushant used to consume marijuana without her consent. I wanted to admit Sushant to a hospital but couldn’t do so without his content.”

Rhea’s shocking confession on SSR’s family: “I would also like to add that Sushant’s family members were aware of his marijuana addiction. I would also like to state that his sister Priyanka Singh and brother-in-law Siddharth were also consuming Marijuana with Sushant and even procured the same for him.”

Have a look at these screenshots of Rhea Chakraborty’s charge sheet: 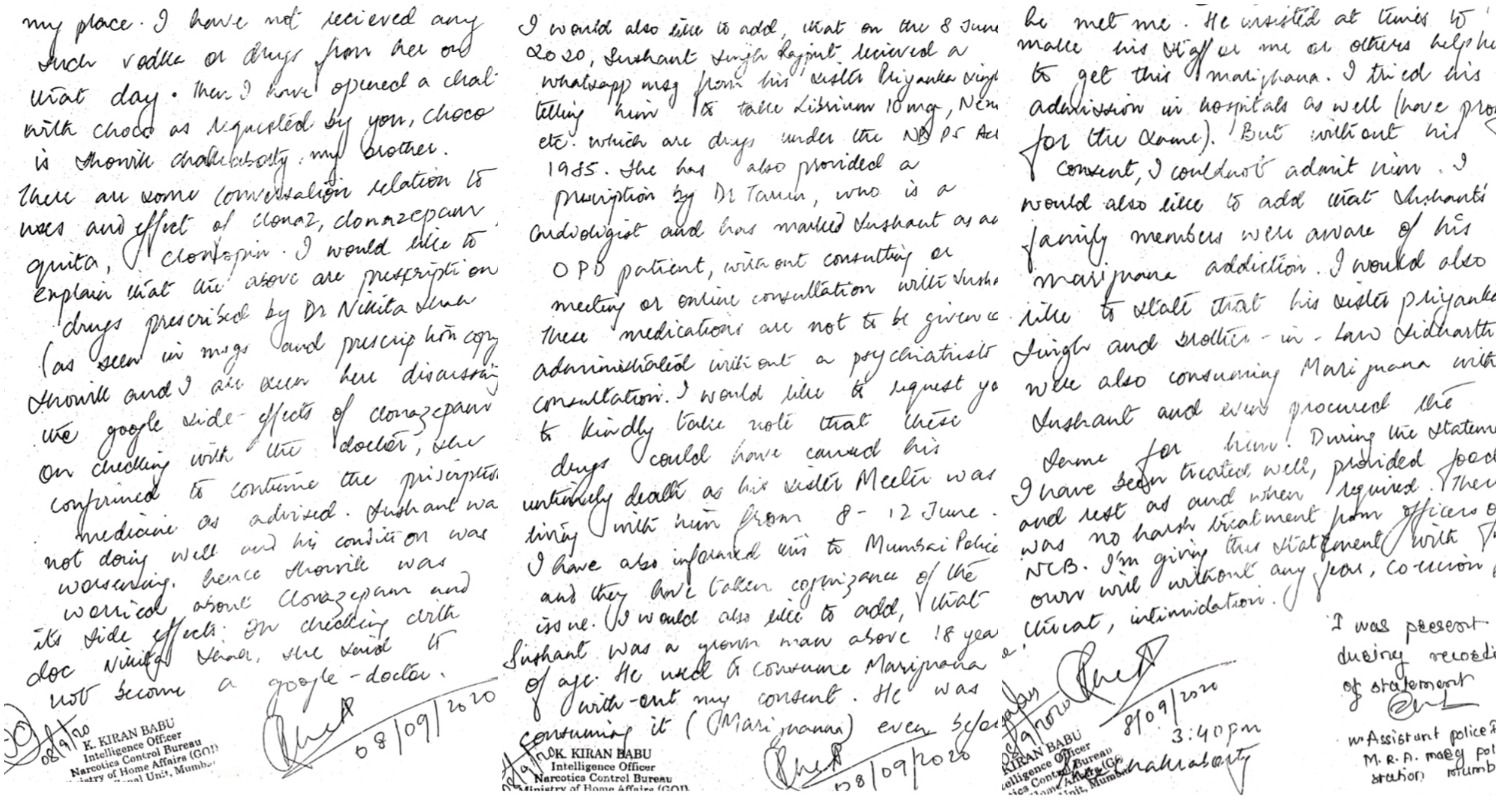 The anti-drugs bureau has been probing the alleged use of drugs in some quarters of Bollywood, which came to the fore after the death of SSR.