Mumbai: Bollywood actor Anushka Sharma and her cricketer husband Virat Kohli are the cutest of all and they have repeatedly proved this. Now, Anushka has interrupted Virat’s ‘ask me anything’ session on Instagram with his fans to ask where her headphones are.

Anushka asked “Where have you kept my headphones?” to which Virat replied “Always on the side table next to the bed love,” with a heart emoji. 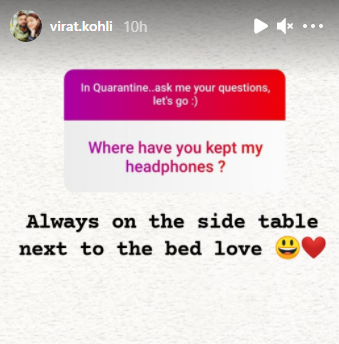 During interaction with fans, Virat also addressed a question about his daughter Vamika. When a fan asked Virat, “What is the meaning of Vamika? How is she? Can we see a glimpse of her please?”, he replied, “Vamika is another name for goddess Durga. No, we have decided as a couple to not expose our child to social media before she has an understanding of what social media is and can make her own choice.” 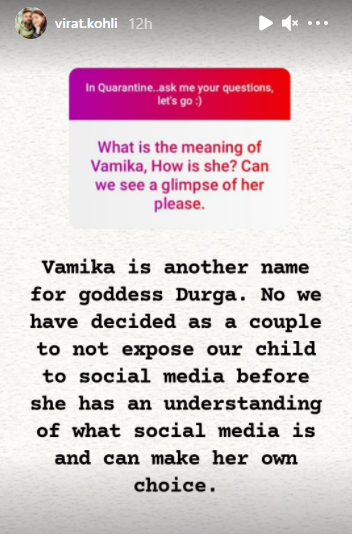 Anushka and Virat were blessed with a baby girl in January this year. Later that month, the couple announced the name of their baby by sharing her first glimpse. The couple has made sure to protect their child from unnecessary attention and has requested paparazzi not click Vamika. Recently, Virat also talked about how his life has changed after the birth of Vamika. “Things change quite drastically. Everything you have been used to changes. You have to be totally aligned with taking care of another life that’s totally dependent on the mother primarily, but also dependent on the father. Both parents taking care of the child is a different environment altogether and something that we both have enjoyed thoroughly,” he said.