Kangana Ranaut vs Twitter: After fashion designers Anand Bhushan and Rimzim Dadu released official statements announcing their disassociation with Kangana Ranaut, the actor’s sister and spokesperson Rangoli Chandel took to social media to announce that she was going to sue Bhushan over his claims.

Rangoli, who was suspended from Twitter last year, took to her Instagram stories and wrote a long note explaining how her sister has never done any brand endorsement with Bhushan for any of his products and he’s just trying to cash in on Kangana’s popularity with his statement. Ranaut added that her sister, the ‘top actress in the country”, has got nothing to do with Bhushan or any of his outfits because she charges ‘crores’ for any brand endorsements.

Her note in Instagram stories read, “This person Anand Bhushan is trying to get mileage on Kangana’s name we are not associated with him in anyway we don’t even know him, many influential handles are, tagging him and dragging Kangana’s name with his brand, Kangana charges crores for any brand endorsements but editorial shoots are not brand endorsements, neither we choose or select those clothes, magazine editors pick those ensemble looks.” (sic)

She further tagged Anand Bhushan and called him a ‘small time designer.’ Chandel mentioned that he will have to now prove in court when and where did Kangana endorse his products or associate herself with his brand. “This small time designer is using India’s top actress name to promote himself I have decided to sue him he will have to prove in the court how and where we had any endorsement with him now that he is claiming to disassociate himself … see you in the court @anandbhushan,” she wrote. 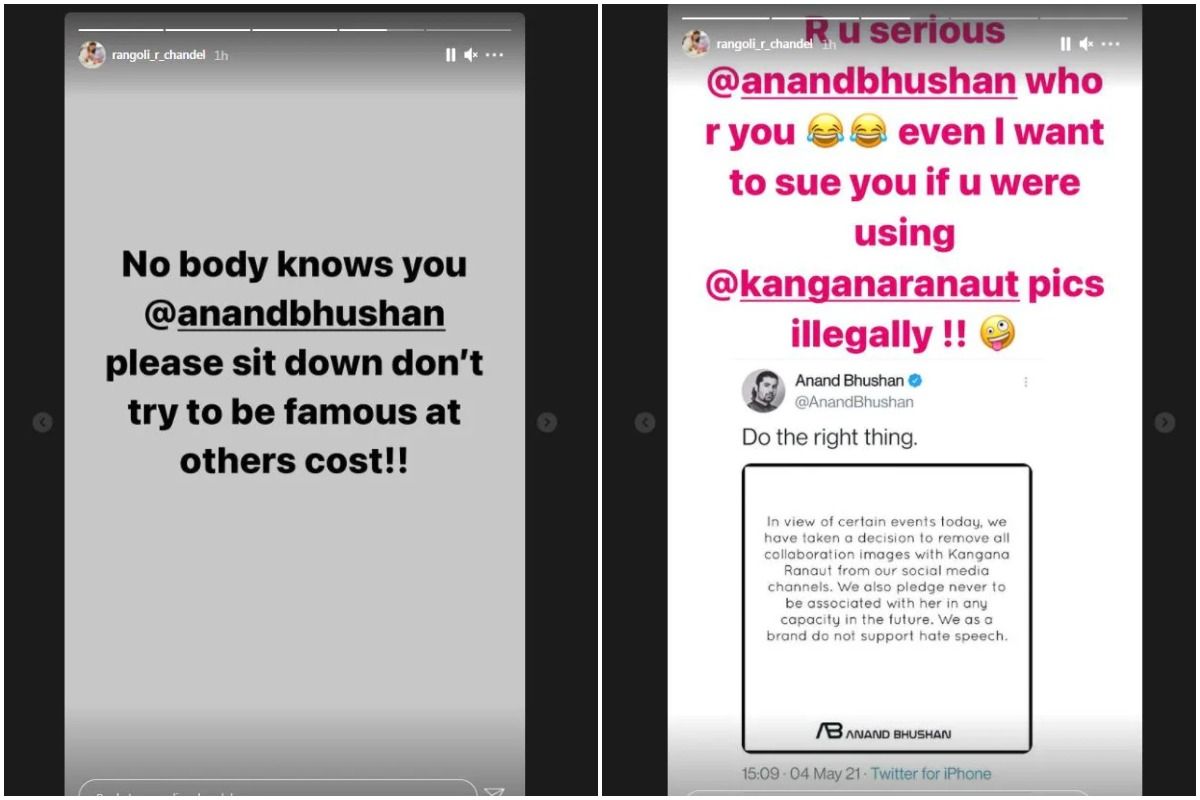 After Twitter suspended Kangana’s account on Tuesday over allegations of ‘hate speech’ and ‘repeated violations of rules’, fashion designer Anand Bhushan released a statement on social media mentioning that they were deleting all their posts that featured Kangana and breaking all their ties with the actor because they don’t want to be associated with someone who constantly triggers hatred with her actions and speech.

The official statement read, “In view of certain events today, we have taken a decision to remove all collaboration images with Kangana Ranaut from our social media channels. We also pledge never to be associated with her in any capacity in the future. We as a brand do not support hate speech.” (sic)

Twitter spokesperson was quoted by WION as saying, “We’ve been clear that we will take strong enforcement action on behavior that has the potential to lead to offline harm. The referenced account has been permanently suspended for repeated violations of Twitter Rules specifically our Hateful Conduct policy and Abusive Behaviour policy. We enforce the Twitter Rules judiciously and impartially for everyone on our service (sic).”