Mumbai: Global star Priyanka Chopra has amplified Sonu Sood’s plea for free education to those children who have lost both their parents to Covid-19. She has extended her support to the ‘visionary philanthropist who ‘thinks and plans ahead’. Sharing Sonu’s video on Instagram, she wrote, “Firstly, I am inspired that Sonu made this critical observation. Secondly, in typical Sonu style, he has also thought of a solution and come up with some suggestions for action. Sonu’s suggestion is to both the state and central governments to ensure free education for all children affected by Covid. Whatever stage of studies they are at—school, college, or pursuing higher studies. The aim is not to allow a pause and definitely not for the lack of finance. If ignored, a huge number of children would be left without the opportunity as adults.”

She further appealed to people to support a child’s education. Priyanka wrote, “For those outside govt, I appeal to your compassion combined with generosity and be the philanthropists, knock on institute doors or anyone who can help to make an impact that will matter. Adopt the education of a child if you can. I fully support Sonu’s ideas and I will actively work towards finding ways to support education because I have always believed that #educationforeverychild is a birthright. And we cannot as a society let the virus change that.” Interestingly, Priyanka’s post received a response from Union Minister for Women and Child Development Smriti Irani, who shared a child helpline number and wrote, “Every state government and district authority is on alert to help provide support to children in need and distress. Every district has been directed to ensure that Child Welfare Committees in the district prioritise such children.”

On her post, Union Minister for Women and Child Developments, Smriti Irani also commented, “Kindly call 1098 – Childline in case you or any organisation finds a child who is orphaned. Every state government and district authority is on alert to help provide support to children in need and distress. Every district has been directed to ensure that Child Welfare Committees in the district prioritise such children. Withholding such information would be detrimental to the needs of the child hence my plea.” 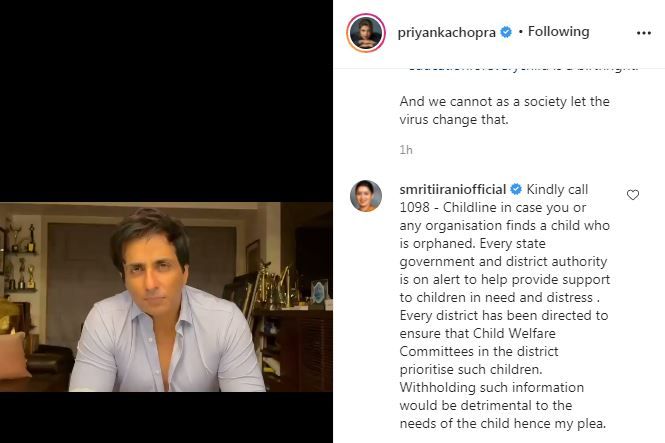 Meanwhile, Sonu Sood has recently managed to arrange over 100 requests for Remdesivir injections and oxygen and over 500 pleas for beds, but disappointed as he couldn’t make it possible for all. He made headlines for his philanthropy work last year where he reached out to migrant workers and helped them reach back home. He has helped thousands of people to reach back their homes, provided medical and educational support. Despite his noble work, he had to deal with online trolling and negative comments.