Mumbai: Bollywood actor Sanjay Dutt’s daughter Trishala Dutt in a question and answer round on Instagram revealed about her past relationship which was for the longest time. A user asked Trishala if she has ever been cheated on. To which the star kid said, ‘Yes’. Later, another user asked her about the longest relationship ‘Just curious, what was your longest relationship that you’ve ever been in? Why did it end? Trishala Dutt chose to answer the question and mentioned it was her longest relationship for almost 7 years and they parted away from each other amicably. “I won’t get into major details on why it ended but let’s just say we decided to mutually part ways. He was ready for a life at the time I was not and we had many, many differences that accumulated over the years. In a nutshell – we both grew apart. It happens. Today, he’s married with children and I wish him all the best,” she wrote. 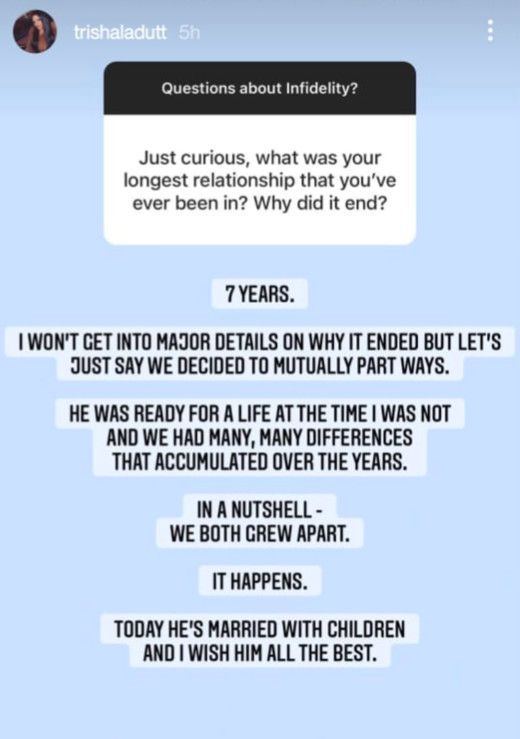 Earlier, Trishala had talked about her last boyfriend’s death and how she coped with it. She responded by saying, “I’m still dealing with it, but I’ve gotten a lot of help for it (and still getting help for it) Since covid, the support groups that I’ve joined have become virtual for now, I see my grief therapist virtually as well, I spend time with my friends and family (while still practising social distancing) and I’m doing a lot of soul searching. I also got off social media for a long time after he passed away because I needed that private time to process what the hell just happen to both of our lives. How in a split second, life can change for anybody. I needed to feel my loss. Not distract myself from it.”

Trishala is Sanjay Dutt’s eldest child with his late wife Richa Sharma. She was born in New York. Richa was an aspiring actor and married Sanjay Dutt in 1987. Richa was diagnosed with a brain tumour and was succumbed to death in 1996.