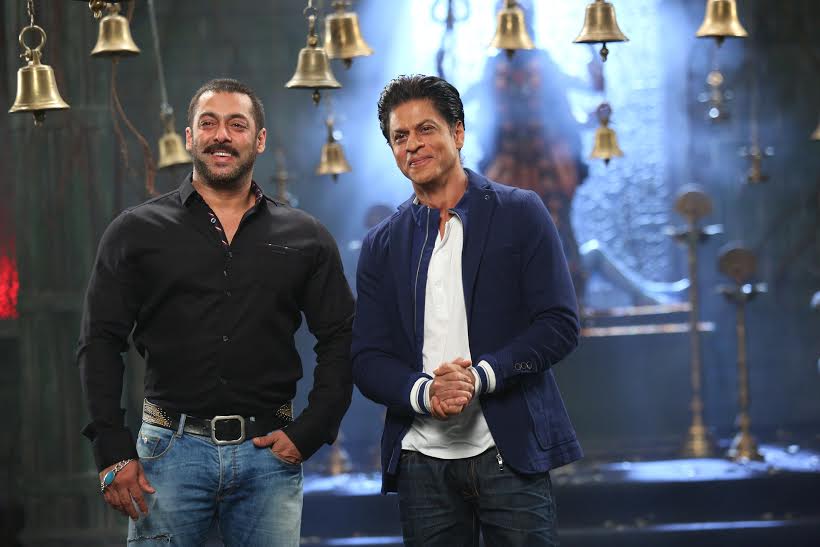 The cult Jodi of Salman and Shahrukh created magic on screen as Karan- Arjun in the year 1995. And finally after 20 years, it’s time for this popular Jodi will reunite and recreate those moments once again. Salman and Shahrukh will soon be seen in an upcoming episode of COLORS show  Bigg Boss Nau on 19-20th December. Recently,  the duo shot for a promo as a build up to the episode ​in Karan- Arjun style. In a dramatic set up of a Mandir with bells swaying behind them, Karan- Arjun appeared on stage and took the opportunity to tell the entire nation that what lies in their heart. Being at his quirkiest ​best ​in the promo, ​Salman said that he still hasn’t forget certain things that went wrong between the two whereas  Shahrukh playfully replied by saying that ‘Dosti mein 19-20 ​toh chalti rehti ​hai’ and it instantly melted Salman’s heart. Salman and Shahrukh were also seen reminiscing their good old days while often breaking into spurts of laughter​whenver Rakhi’s – ‘​​Mere Karan Arjun Aaeng​e ​ Voice over would play…The camaraderie the two shared was a delight to everyone’s eyes​on the sets​ and will soon become a national phenomenon as they will come together soon on Bigg Boss Nau Double Trouble​ this month.